A total of 178 pills were found in the fabric pocket attached to its back, the newspaper says.

The bird was caught near the customs building in Abdali, close to the border with Iraq.

An al-Rai journalist said the drugs were a form of ketamine, an anaesthetic also used as an illegal party drug.

Abdullah Fahmi told the BBC that customs officials already knew pigeons were being used to smuggle drugs, but this was the first time they had caught a bird in the act. 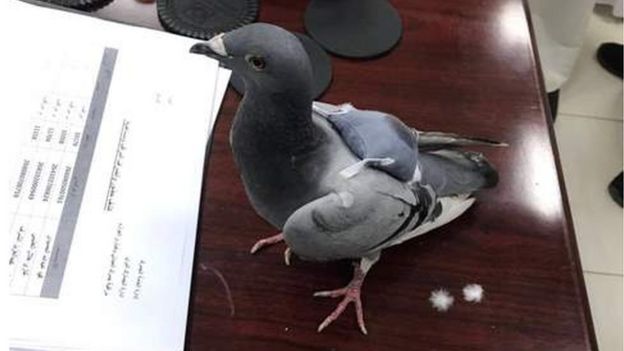 Law enforcement officials elsewhere have, however, identified previous cases where pigeons have been used to carry lightweight high-value narcotics.
In 2015, prison guards in Costa Rica caught a pigeon carrying cocaine and cannabis in a zipped pouch.
And in 2011, Colombian police discovered a pigeon that was unable to fly over a high prison wall because of the weight of a package of cocaine and marijuana strapped to it.
Pigeons have been used to carry messages since Roman times, using their powerful "homing" ability.
Racing pigeons can return to their lofts from distances of hundreds of kilometres.