Actress Angelina Jolie has had her ovaries and fallopian tubes removed as a preventative measure against cancer.

Writing in the New York Times, Jolie said she had the surgery last week as she carries a gene that gave her a 50% risk of developing ovarian cancer.

Two years ago, Jolie, whose mother died from cancer, had a double mastectomy.

"It is not easy to make these decisions," she said. "But it is possible to take control and tackle head-on any health issue."

Jolie, who is married to Hollywood actor Brad Pitt, elected to have her ovaries and fallopian tubes removed after a check-up two weeks ago. 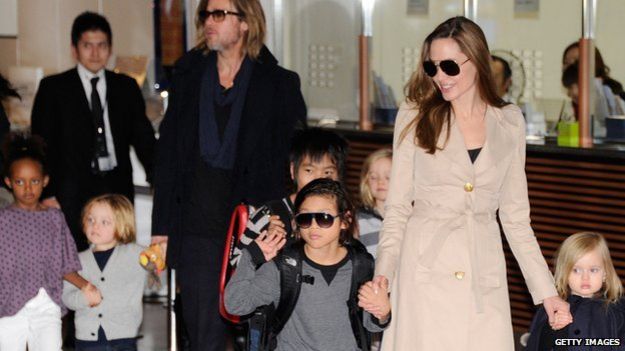 The couple have six children

"I called my husband in France, who was on a plane within hours. The beautiful thing about such moments in life is that there is so much clarity. You know what you live for and what matters. It is polarizing, and it is peaceful."

Further tests revealed Jolie was free of a tumour, but elected to have her ovaries removed after consulting doctors. Her mother, grandmother and aunt all died of the disease.

"My doctors indicated I should have preventive surgery about a decade before the earliest onset of cancer in my female relatives," wrote Jolie.

In 2013, the award-winning actress had both breasts removed to cut her risk of breast cancer

And now two years later, she has had both ovaries and fallopian tubes removed

These preventive steps greatly decrease her lifetime risk of cancer

Both men and women who inherit faulty BRCA1, whether or not they go on to develop cancer themselves, have a 50:50 chance of passing the gene on to their sons or daughters

Writing about the procedure, saying: "It is a less complex surgery than the mastectomy, but its effects are more severe. It puts a woman into forced menopause."

Jolie, who is also a director and UN envoy, will now take hormone replacements.

"Regardless of the hormone replacements I'm taking, I am now in menopause," Jolie said.

"I will not be able to have any more children, and I expect some physical changes. But I feel at ease with whatever will come, not because I am strong but because this is a part of life. It is nothing to be feared."

"We applaud Angelina Jolie's decision to announce that she has had preventative surgery for ovarian cancer and are anticipating another wave of the 'Angelina Effect', which saw a dramatic increase in the number of women referred for genetic testing after Angelina announced that she had undergone a double mastectomy in 2013," said Katherine Taylor, the charity's acting chief executive.

"While all women in the UK have a one in 54 chance of developing ovarian cancer, for those with a mutation in their BRAC1/2 genes, like Angelina Jolie, the risk increases to one in two.

"If women know they have BRCA gene mutations, they can choose to take action before cancer develops, much like Angelina has. Her bravery to announce this news publicly could save lives."

Jolie, who is married to actor Brad Pitt, has six children, three of whom are adopted.

The Oscar-winning Hollywood star added: "It is not possible to remove all risk, and the fact is I remain prone to cancer. I will look for natural ways to strengthen my immune system. I feel feminine, and grounded in the choices I am making for myself and my family.

"I know my children will never have to say: "Mom died of ovarian cancer."