Guinea's Naby Keita is "100 per cent" staying at his current club RB Leipzig, despite interest from Liverpool, according to coach Ralph Hasenhuttl.

The 22-year-old impressed in Leipzig's second-placed finish in the Bundesliga last season.

The German club have since reportedly rejected two bids from Liverpool for the midfielder over the summer.

"The chances of Naby leaving are nil," Hasenhuttl said after Leipzig's 1-0 Emirates Cup defeat to Sevilla.

"It's 100 percent that Naby will play this year at Leipzig.

"At the beginning of the transfer period we said we would start the season with all our best players.

"Liverpool will finish their transfer activities and that's ok with me." 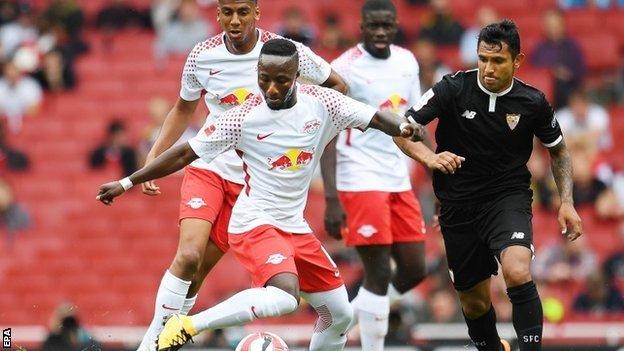 Leipzig confirmed they turned down an offer of £67m from an unnamed club.

Keita scored eight goals in 31 appearances last season to help Leipzig qualify for the Champions League for the first time.

"For us, everyone can see how important Naby Keita is for our game," Hasenhuttl said.

"We [have] very young players and I think for them it is very important to play the first year in the Champions League as a team."

Keita played the full 90 minutes at the pre-season tournament at Arsenal's Emirates Stadium and Hasenhuttl said the player is more than happy to stay put.

"He is more focused on us and has more fun now than last year. He knows this season will be fantastic for us," he said.

"It is the first time in the Champions League and also for Naby Keita it is a great thing. I think he is more focused than last year."