Zambia beat Mauritius 3-0 in the final of the 2017 Cosafa Under-17 Championships at the St Francois Xavier Stadium in Port Louis.

Mauritius - in their first ever continental final - held out for over an hour, before Zambia scored three goals in 10 minutes.

Captain Prince Mumba, Christopher Phiri and Kingsley Hakwiya were all on target for the Junior Chipolopolo.

It is Zambia's first title win in the competition for southern African teams.

After their disqualification 12 months ago for fielding ineligible players, Zambia are riding a wave of success after their Under-20 team were crowned African champions and then excelled at the recent Fifa Under-20 World Cup in South Korea.

"It was a very good tournament for Zambia but we had some difficulties in the first half as the home team was getting full support from their public," Zambian U-17 coach Mumamba Numba told BBC Sport. 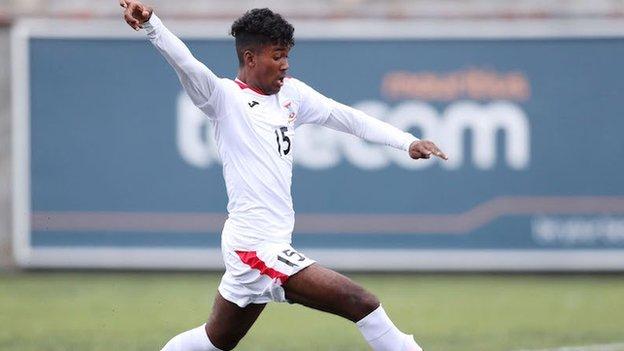 "But I spoke to them at half-time and they scored three goals."
"Last year we could not accomplish our mission, so we told the boys that we should come to win [this year] and prove that they deserved to be applauded."
Mauritius drew some consolation from left-winger Jean Yannick Aristide being named Player of the Tournament.
Mauritius FA President Samir Sobha praised his team's performance in their first African final.
"We set up this team only seven months ago and we are delighted with the results," he told BBC Sport.
"We have youth championships for the U-13, U-15 and U-17 - for both men and women - and the work we have begun on youth development is yielding its fruits.
"There is still a long way to go, but we want to continue on this path."
Earlier in the day, Malawi defeated South Africa 2-1 to claim third place.