Namibia's footballers overcame over a year without a domestic league to knock Zimbabwe out of the 2018 African Nations Championship (Chan).

The Namibians won 5-4 on penalties after the match ended 1-1 on aggregate.

Zimbabwe were hailed as heroes just two weeks ago after winning the Cosafa Cup, the southern African championship.

"We haven't had a league running since April last year, so it's been very tough for us," Namibia coach Ricardo Mannetti told BBC Sport.

The Chan is contested by footballers playing in their own domestic league.

"80% of the squad have not been playing regularly and the only matches we had as a team were at Cosafa, where some played 1-2 matches," added Mannetti.

"So we had to take these players, put them in camp, feed them and get them mentally prepared and all that. For most of them, this was the (only) second or third match over a year."

The Namibian Premier League, which has lost its sponsorship, has not been contested since the 2015-16 season ended 15 months ago.

Rumours of backroom tussles between the Namibian FA and the local league have emerged in the media.

Unlike the Namibians, who had been in camp for three months to prepare for both Cosafa and Chan, Zimbabwe blamed their loss - which came despite winning Sunday's second leg 1-0 - on insufficient build-up. 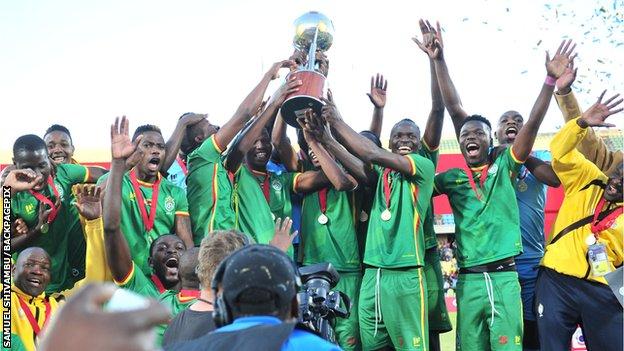 Zimbabwe were crowned Cosafa Cup champions earlier this month, after beating Zambia in the final in South Africa

"The only time we had the full squad in training was Friday," said Sunday Chidzambwa. "With these tournaments, you need a bit of time to prepare. You don't prepare a team well in a short space of time."
Namibia will meet Comoros in the next round, after the island nation knocked out Lesotho.
The Chan was introduced in 2008 to showcase local talent, with many senior national squads composed of Europe-based stars.
Qualifying is played on a regional basis in a bid to keep travelling costs to a minimum.
The final qualifying round will take place in August when the 15 teams that will join hosts Kenya in January's finals will become known.
DR Congo, who have won two of the four Chans contested so far and face Congo in August, are the reigning champions.