You Are Here: Home → News → Politics
Police Arrest 2 Ethiopia Opposition Leaders
Will the Release of Muslim Community Leaders from Prison Change Anything in Ethiopia?

The last time that President Obama’s approval rating in Washington Post-ABC News polling was as high as it is in our new survey was six months after he took office. At 58 percent, Obama’s approval is 15 points higher than it was on the eve of the 2014 elections, where his party got blown out. Hillary Clinton’s hope is that the reversal of opinions on Obama two years later will also lead to a reversal of fortunes for other Democrats — and there’s reason to think that it will.

We’ll start by noting that Obama’s approval rating in our survey is quite a bit higher than in other recent polls. Earlier this month, CNN-ORC had him at 51 percent. At the end of August, Fox had him at 54. But even in Gallup’s weekly averages, Obama has been over 50 percent for most of this year.

In the past, we’ve seen a good correlation between final vote share and Post-ABC approval polling — even when the approval rating was tested in August or September of the same year. The line on the graphs below shows that correlation for years that we have data: As presidential approval improves, so does the vote share of the president’s party. At the low end are 1992, when Bill Clinton beat George H.W. Bush, and 1980, when Ronald Reagan beat Jimmy Carter. At the high end are the reelections of Lyndon Johnson, Dwight Eisenhower and Richard Nixon. High approval, high results. Low approval, low results. 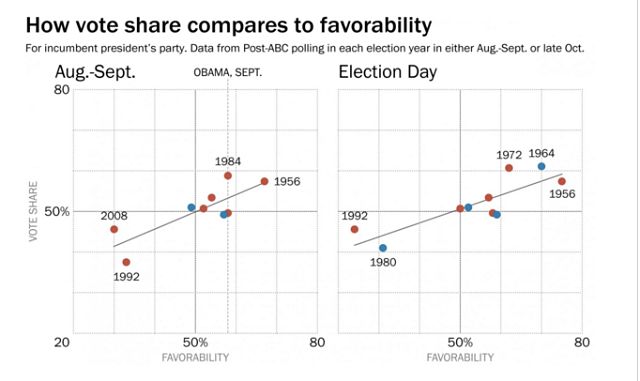 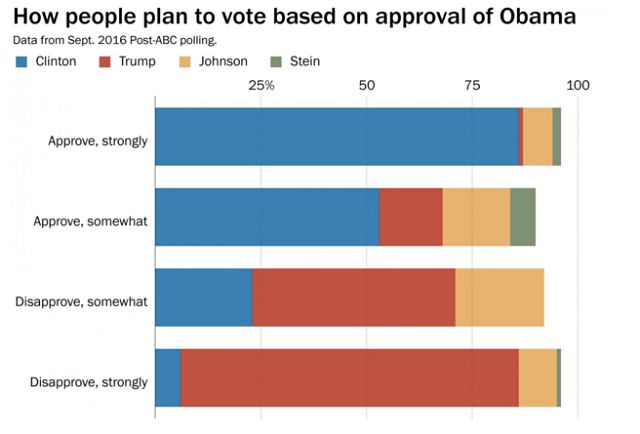