I am taking this opportunity to pass this press release to the media houses in regards to the South Sudan Murle ethnic that annihilated thirteen villages belonging to Ethiopian Nuer; I visited the victims at Maiwut Hospital in my capacity as Chairman of BNFA with my officials namely; Elizabeth Nyayual Gatkuoth-Chairperson of BNFA Women Union and Isaac Buor Bol-BNFA Chief of Finance.

First and foremost, on behalf of BNFA and on my own behalf, I hereby conveying my heartfelt condolences to the families of the more than two hundred children, women and elders killed in this barbaric attack. I also wish the wounded at Maiwut Hospital and various health facilities a very quick recovery. 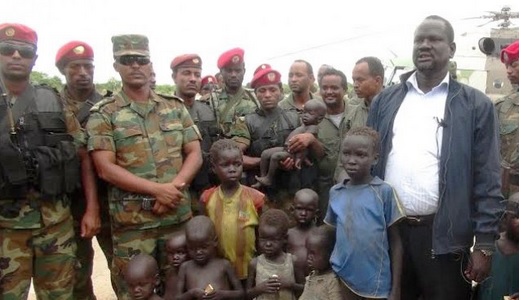 Secondly, I condemn this barbaric but well-coordinated attack in the strongest terms possible and the perpetrators must face the justice. The April 15th, 2016 on Ethiopian 13 villages was well-coordinated: the assailants possessed modern weaponry with adequate ammunitions, were all in SPLA uniforms in good forms and were coordinating and synchronizing their attacks incumbent to that of military tactics. The nature of attack also suggests that these assailants were meant to further Kiir regime ethnic cleansing agenda on Nuer because they carried massacre indiscriminately targeting children, women and elderly.

They abducted more than 100 children and also looted the more than 2,000 heads of cattle after their carnage and thereafter headed towards Pibor County in South Sudan. At this juncture, I would to declare to the media houses that the incidence carried out on 13 Ethiopian villages was clearly overseen by Kiir and JCE in Juba. They trained these hoodlums around Pochalla and Pibor areas and armed them to the teeth and further instructed them destroy those villages because they are adjacent to Pagak of South Sudan-which is the HQs for SPLA-IO. In this light, Kiir and JCE are criminally responsible.