You Are Here: Home → News → Odd News
Unbelievable!! Hotel Where Perverts Pay To Have Sex With Animals (PHOTOS)
22yr old makes money by getting half-na ked and eating junk food for men online

A homing pigeon was intercepted by police at a prison near San Jose, Costa Rica, after it was seen by a guard landing in the jail’s courtyard with a bag tied to its body.

On inspection, the black zipper bag was found to contain 14g of cocaine and the same amount of marijuana. Authorities suspect the bird was looked after and fed by an inmate in the medium-security wing of La Reforma prison, Costa Rica’s biggest penitentiar, before someone smuggled it out of the prison only to load it with illicit cargo ahead of its return route.

The director of Costa Rica’s prison police force told the media after the ruse had been exposed last Tuesday that the pigeon was able to fly perfectly well despite the drug-stuffed pouch strapped against its breast.

Pablo Bertozzi, who said he had seen cases of cats being used to transport drugs strapped to their tails, added that the homing pigeon incident would lead to a redoubling of efforts to clean the jail of controlled substances.

“The real problem is that there is a lot of consumption. If there weren’t consumers, the drugs wouldn’t be arriving”, Mr Bertozzi said.

The bird, which has affectionately been nicknamed “narcopigeon” (narcopaloma) by Costa Ricans, has been handed over by the authorities to a zoo, where it is being kept under observation before being housed in a larger enclosure. 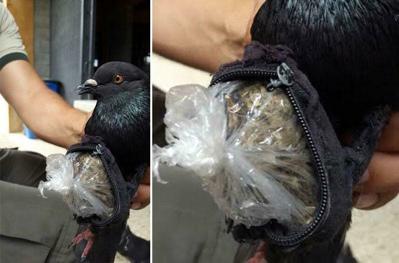 “Because of the way it came to us, it can never be freed,” a zoo worker told local media, adding that the bird was reluctant to eat, probably because it had become used to being hand-fed by one person.

In 2011, prison guards in Bucaramanga, Colombia, found a pigeon attempting without success to fly over the wall into the jail laden with 45g of marijuana.

Two years ago, police in Buenos Aires smashed a marijuana-trafficking ring which used pigeons as a risk-free manner to transport the drug to their home base.