The colorful anniversary was celebrated in the presence of Ambassador Taye Atske-Selassie, State Minister of Foreign Affairs, representatives of UN member states and UN staff. The 70th anniversary, under the theme “Strong UN. Better World”, is a special occasion to showcase the UN’s role in promoting peace and security, human dignity, social progress and better living standards for humanity. The UN has made a difference in billions of lives globally and with the current challenges the world is facing its work becomes more important than ever. Delivering the United Nations Secretary General’s message at the event, the acting United Nations Resident Coordinator in Ethiopia, Mr. George Okutho highlighted, “The United Nations works for the entire human family of seven billion people, and cares for the earth, our one and only home.” 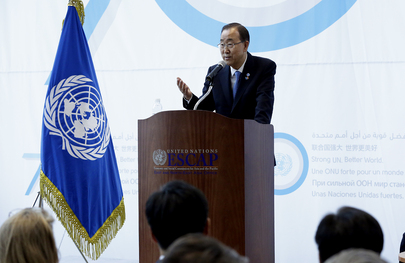 The UN heads of agencies in Ethiopia took a moment to affirm their commitment to the values of the UN Charter. In Ethiopia the UN helps to support country’s development agenda in a harmonized manner, particularly to tackle priorities in the areas of inclusive growth & structural transformation; resilience and green economy; investing in human capital and expanded access to quality and equitable basic services; good governance, participation and capacity development; and equality and empowerment.