Obama Brings Gifts $1B To Entrepreneurs During Kenya Summit

NAIROBI — President Barack Obama co-hosted the Global Entrepreneurship Summit in Kenya Saturday, where he is making his first visit as U.S. president.

Kenyan President Uhuru Kenyatta introduced the U.S. president, whom he described as a great friend to the African continent.

Obama greeted the summit saying “Niaje Wasee,” Kenyan urban slang for “how are you.”

“It is wonderful to be back in Kenya. I am proud to be the first U.S. president to visit Kenya,” Obama said in his opening remarks. “This is a personal thing for me, my family came from these parts and I have relatives and family here.”

He then quickly got down to business, announcing to the gathering of entrepreneurs and investors that the U.S. had secured more than $1 billion in investment for new businesses around the world, following up on a promise made at last year’s summit in Morocco.

Obama noted that Africa is one of the fastest-growing continents in the world where people are being lifted out of poverty and the middle class is expanding.

“This continent needs to be a future hub of global growth, not just African growth,” he said. 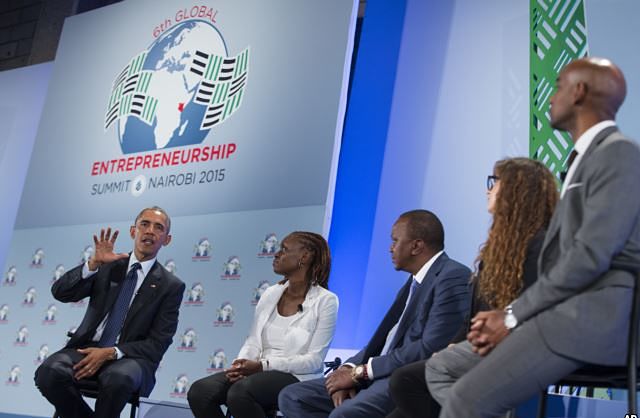 President Barack Obama, left, takes part in a panel discussion at the Global Entrepreneurship Summit at the United Nations Compound in Nairobi, Kenya on July 25th, 2015.

In his remarks, Kenyatta spoke of Kenya’s security struggles and its swiftly growing economy. He told his audience to tell friends back at home and around the world that “Africa is open and ready for business.”

“You all know that for a decade now the economies of Africa have been the fastest growing in the world. Behind these statistics is a story of a new generation of Africans committed to the African renaissance,” he said.

After a discussion onstage with several young entrepreneurs, Obama closed the session exhorting audience members to pursue their business ventures. “Go out there and start something,” he said. “We’re excited about it. We expect great things out of you.”

A delegation of U.S. lawmakers, White House officials and American business leaders is accompanying the president to the summit, a move the U.S. embassy in Nairobi says underscores the importance the United States places on supporting Africa’s entrepreneurs.

The streets of Nairobi have been painted and polished as the city has spared no expense to welcome Obama for what Kenyans have called his “homecoming.”

But security is high for the U.S. president’s visit, with at least 10,000 police officers deployed in Nairobi. The U.S. embassy has warned that the summit Obama is hosting could be “a target for terrorists.”

Obama then visited the U.S. embassy, where a large crowd had gathered outside to see him. Later Saturday, he met with Kenyatta for talks expected to center on building trade ties, countering violent extremism in Kenya and across the region, boosting government transparency and curbing the poaching of Kenya’s wildlife.