US President Obama Arrives In Kenya

Barack Obama has arrived in Kenya on the first visit to his ancestral home as serving US president.

During his two-day visit Mr Obama will hold talks with Kenyan President Uhuru Kenyatta and other top officials.

Trade will feature strongly, but Mr Obama also said he would deliver a “blunt message” to African leaders about gay rights and discrimination.

The trip to Kenya and then Ethiopia is also designed to show US commitment to fighting terror in East Africa.

Arriving in the country where his father was born, he was greeted at the airport by President Kenyatta with a handshake and embrace. 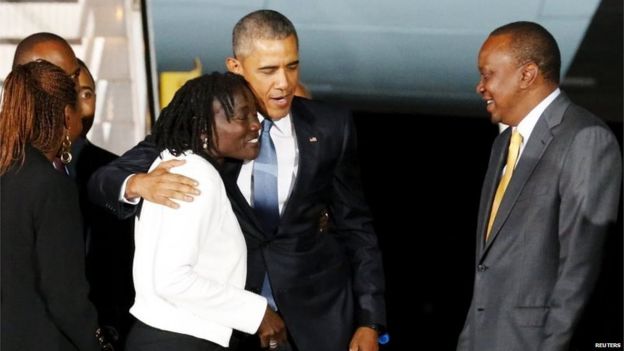 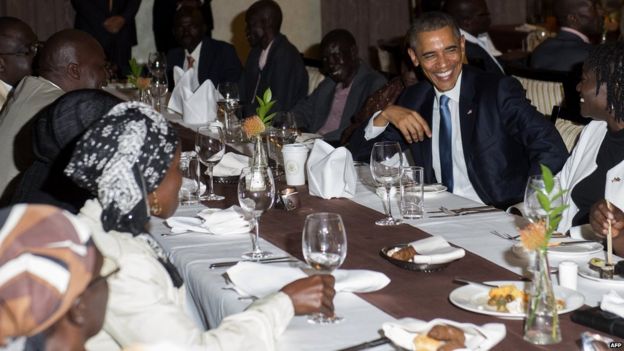 The president later enjoyed dinner with members of his Kenyan family

Mr Obama also hugged his half-sister Auma, who then travelled in the presidential limousine to the hotel where the US leader is staying. Crowds cheered the motorcade along its route.

At dinner, the president was joined by more relatives, including the woman known as “Granny” or “Mama Sarah”, who helped raise his now-deceased father.

Security is tight. The Kenyan capital is in lockdown, many streets are closed and people are opting to stay at home.

Mr Obama, the first sitting US president to visit Kenya, will hold talks on trade and investment, and also security and counter-terrorism.

He also becomes the first US leader to address the African Union when he travels on to Ethiopia on Sunday.