Staffing and running costs for the Ethiopian school amount to £650 a month, which Helen, founder of Poverty Swap, is appealing to people to contribute to.

Helen Faulds, who set up Poverty Swap seven years ago, recently returned from a trip to Africa where she was able to see the thriving school.

It was built to replace a nursery which the charity had set up four years ago and had 58 pupils – children who would otherwise have had no means of an education.

“I was in Ethiopia at the beginning of last year and discovered that the nursery had grown so fast the building was not fit for purpose. The authorities were threatening to close it down,” said Helen.

She returned home determined to raise the £12,500 needed to build a new school. Three months later, she had done just that.

“We also held a children’s fun day and auction.”

She visited the new school recently. “It’s a five-classroom school with toilets and a playground. It’s an amazing little building which has nearly 60 pupils and nine staff. 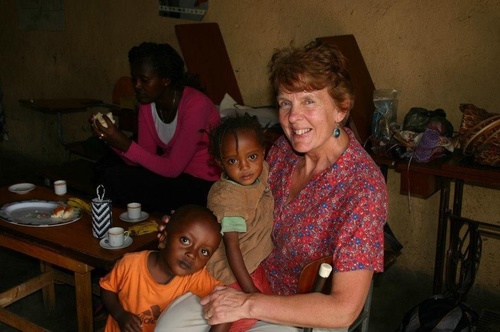 “The nursery has transformed these children and the community. Many of these families are the poorest of the poor, with none of the adults educated.

“These kids are learning to read and write, which will change their lives.”

The school has formed a link with Seaton Junior School after Helen did an assembly there. She took out pictures and a mosaic they had made.

Staffing and running costs for the Ethiopian school amount to £650 a month, which Helen is appealing to people to contribute to.

She said: “It’s being run by local people but we have agreed to raise the running costs.