Home | News | Nourishing Phoenix With a Dish of Ethiopian Culture

Nourishing Phoenix With a Dish of Ethiopian Culture

Eyasu Zegeye and Azeb Getahun own Abyssinia Restaurant and Café, one of the Ethiopian restaurants in Phoenix, AZ. Abyssinia is a modest operation, seating a maximum of 30 customers.

Long before they were married and opened a restaurant together, Eyasu offered to help Azeb learn to drive. She was already paying for private lessons, but Eyasu insisted. He was a limo driver, after all. Why pay a stranger when she could learn from Eyasu for free?

Eyasu and Azeb didn’t know each other well. They met through their mothers, who were both born in Ethiopia and had become neighbors in the same apartment complex in Phoenix. Both mothers were housewives and recent arrivals in the United States, and both of their children had come to join them. Eyasu was driving a car, and Azeb was working as a caregiver for children with disabilities. 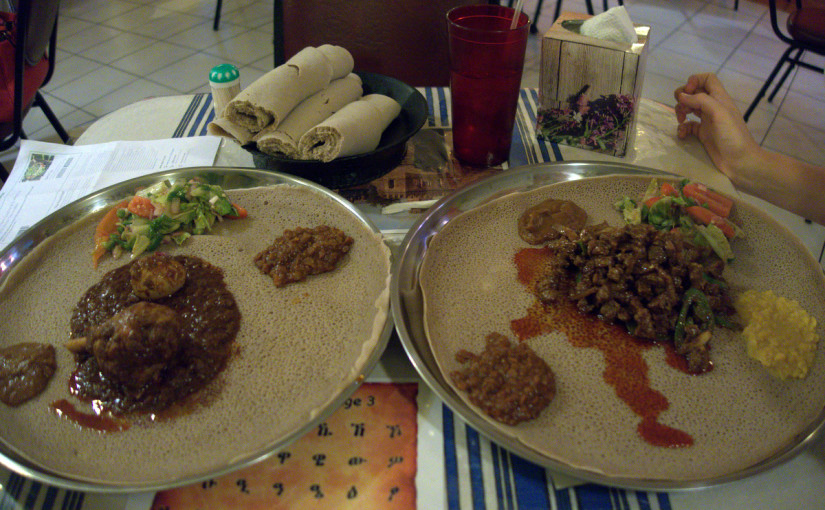 Azeb took driving lessons from Eyasu, and when they started talking, they realized that they had grown up only a couple of miles from each other in Addis Ababa, the capital of Ethiopia. They attended the same church, they went to the same school, and they even knew some of the same people.

“How come I didn’t know you back then?” Eyasu recalls thinking.

Today, Eyasu Zegeye and Azeb Getahun own Abyssinia Restaurant & Café, one of the Valley’s handful of Ethiopian restaurants. Abyssinia Restaurant and Café is a modest operation, seating a maximum of 30 customers. The eatery is tucked into a strip mall on Indian School Road; it would be easy to drive past this busy intersection without ever spotting the sign. But in only two years, Abyssinia has become one of the touchstones of local Ethiopian culture. If you want to learn what life is like in this East African nation, Abyssinia is a good place to start.

“The simple goal is to introduce Ethiopian culture and food to the greater Phoenix area,” says Eyasu, a vibrant 40-year-old with a receding hairline and confident grin. “This was my wife’s dream for years. We strive to serve our customers in a very honest way. If we mean gluten-free, it must be gluten-free, without any backdoor recipe. Sometimes it’s not about money. It’s about satisfaction and fulfillment.”

Eyasu Zegeye is friendly and polite, but he’s also intense. He speaks in precise English, enunciating every syllable. His mother moved to Arizona about 15 years ago, and he followed in her footsteps. For a solid decade, Eyasu has learned the ins and outs of Phoenix, perfecting his English and immersing himself in the Ethiopian community.