On Wednesday, January 11, 2017 lawmakers in Turkey exchanged punches during a debate over constitutional amendments that would expand presidential powers.

According to Turkish state news agency Anadolu, ‘the fight broke out on Wednesday shortly after opposition lawmaker Özgür Özel told ruling party lawmakers “You are trying to destroy yourselves when the TV is off and nobody sees. We won’t let it happen’.

Lawmakers were debating ending “parliament’s authorization to inspect ministers and the Cabinet.” Shortly after Özel comments, fellow members of the main opposition Republican People’s Party encircled the speaker’s rostrum with arms joined, occupying the area in protest. The fight broke out soon afterward and one senior lawmaker with the ruling Justice and Development (AK) party suffered a broken nose, according to the report. 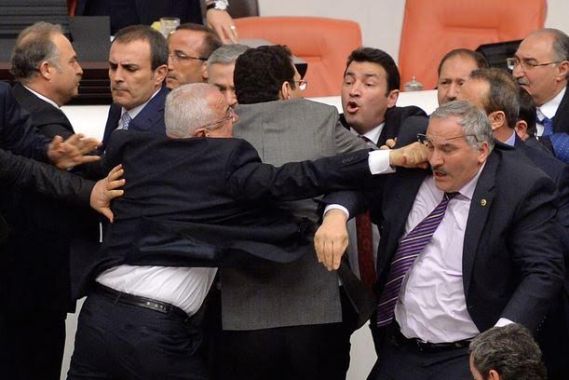