A Texas man who was battling leukemia promised his bride-to-be that he would give her the wedding of their dreams. On his deathbed, he made good on that promise, then passed away 36 hours later.

Raul Hinojosa and Yvonne Lamas became engaged back in 2006. Still, the couple was in no rush to wed and decided to wait until they could afford their dream wedding.

Then a diagnosis delayed their wedding even further — Hinojosa was diagnosed with leukemia in 2012.

“He had been trying hard to save up [for the wedding,]” Lamas, 34, told ABC News. “He kept saying, ‘I finally found the one for me. I finally found my princess, who deserves a fairy tale wedding.'”

But the couple focused on his treatment plan and recovery instead of wedding plans. That’s when they hit a roadblock back in October as Hinojosa, who is known to family and friends as Tiny, was hospitalized.

“Things started getting worse,” Lamas recalled. “It was just one thing after the other with his sickness.”

And last week, doctors at Baptist St. Anthony’s Hospital in Amarillo, Texas, told the couple that “they did everything they could,” the bride said. The chaplain then asked Hinojosa if he had a final wish.

Lamas said that her fiancé really wanted to go home to be with his family. Along with their 9-year-old son named Jovon, the couple also has four other children from previous relationships.

Doctors weren’t sure if he’d even make it home alive due to his low oxygen level, so they asked him if he had one more wish. 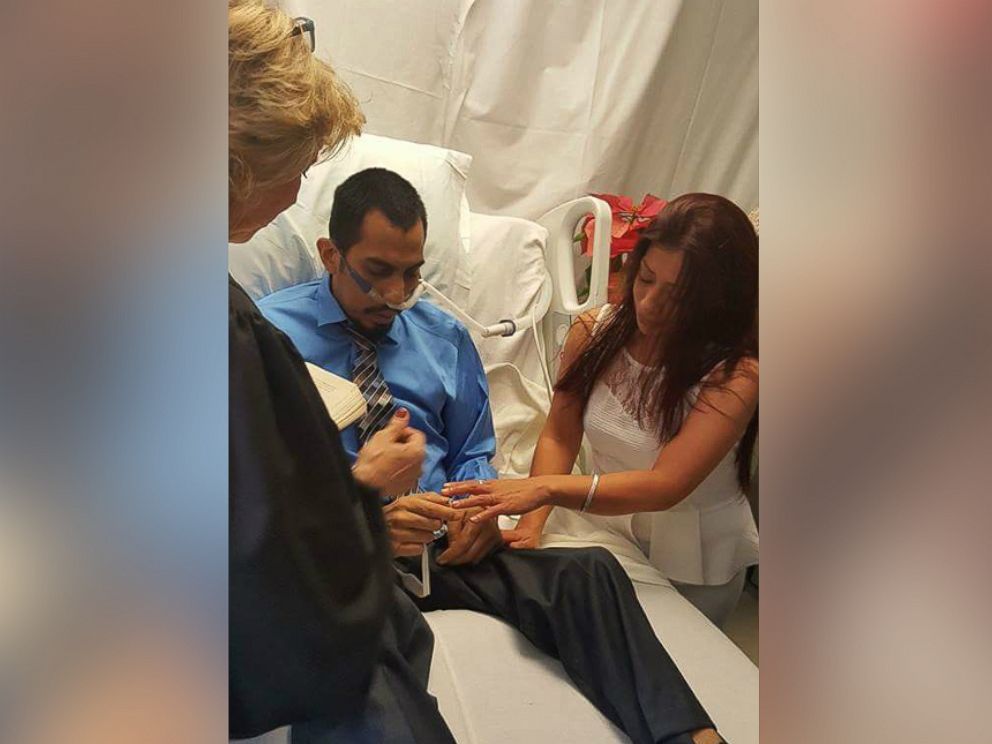 Raul Hinojosa and his fiance Yvonne wed in Baptist St. Anthony’s Hospital in Amarillo, Texas on Dec. 9, 2016, only 36 hours before he succumbed to leukemia.more +

Lamas, who works in retail, said she immediately started crying because Hinojosa didn’t forget the promise he made to her — to marry her.

The hospital kicked into high-gear to pull off a wedding fit for the couple. The hospital cafeteria created a wedding cake for the occasion and even their local judge waived the customary 72-hour waiting period so that Lamas could secure a marriage license.

Family members secured a dress and shoes for Lamas, and the director of the hospital’s critical care unit gave the suit off his back — down to his socks — to Hinojosa.

Family and friends crowded into the dying man’s hospital room to witness the wedding. Some even spilled out into the hallway, according to video obtained by ABC News.