Mr Peres suffered a stroke two weeks ago. His condition had improved before a sudden deterioration on Tuesday.

His son Chemi led tributes to “one of the founding fathers of the state of Israel” who “worked tirelessly” for it.

World figures are expected to attend his funeral in Jerusalem on Friday, including US President Barack Obama, Prince Charles and Pope Francis.

Mr Peres was one of the last of a generation of Israeli politicians present at the new nation’s birth in 1948.

He won the Nobel Peace prize in 1994 for his role negotiating peace accords with the Palestinians a year earlier.

He once said the Palestinians were Israel’s “closest neighbours” and might become its “closest friends”. 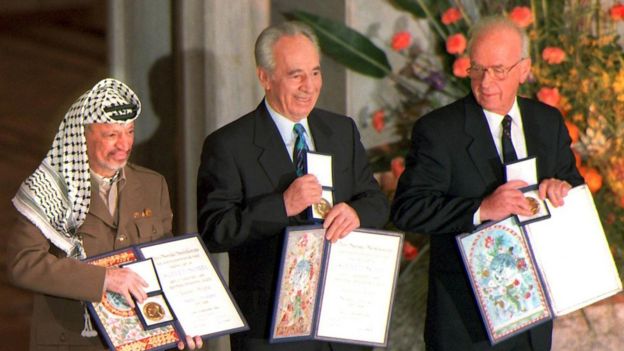 Mr Peres died in a hospital near Tel Aviv early on Wednesday, with his family at his bedside.

He had been in the intensive care unit of the Sheba Medical Centre after suffering a major stroke on 13 September.

The funeral will be held at Mount Herzl, Israel’s national cemetery in Jerusalem.

The Clintons, UN Secretary-General Ban Ki-moon and UK Prime Minister Theresa May have all confirmed they will attend, Israel’s Foreign Ministry said.

He “left us without suffering”, said Rafi Walden, his son-in-law.

Mr Peres’s son, Chemi, said of his father: “He served our people before we even had a country of our own.