Nigerian Ladies Rescued from Prostitution by Police in Spain

The ladies, who were lured to the Spanish mainland with fake promises of jobs, were forced to work 14 hours a day. One of the women, police have revealed, was just 16 years of age.

Sadly, all 21 ladies are from Nigeria and were working in the exclusive districts of Ibiza.

An operation carried out by the Spanish police in association with Office of Criminal Investigation in Germany and Europol has led to the arrest of 24 suspects.

"The network captured very young victims among the lower classes of the Nigerian cities, deceiving them with false job offers in Spain.

"Once in our country, they were forced into prostitution in marathon days, being beaten if they did not earn the money demanded by the gang," said a police spokesman.

Investigators said Ibiza was chosen for the summer because of the high influx of tourists, with the gang totally controlling the streets of the exclusive areas.

They were kept in a house and only allowed out to buy food or to keep an appointment with a client.

"If they didn't earn 1,000 euros a day, they would be forced to kneel for hours and beaten with sticks and brooms,' said the spokesman. "The vulnerable women were given employment offers 'too good to refuse' in view of their poor circumstances but once they are in, were unable to escape."

They were subjected to rituals and sworn to loyalty contracts under the threat of family members being killed. The women were smuggled into Europe on boats and planes and were only told their real job offer when they arrived in Spain.

They were then told they would have to pay up to 50,000 pounds to be freed and could do so through prostitution. 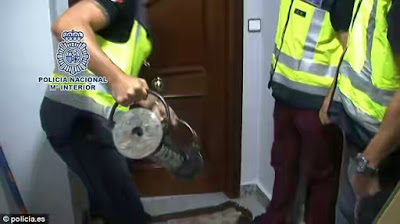 Those arrested included two women, the ringleaders who had 'years of experience' in ashawo runs.