Tanzanian police have arrested more than 80 Ethiopian migrants believed to be heading to South Africa.

The 83 migrants were found crammed into the back of a lorry that was headed towards the Tanzania-Malawi border.

Most were dehydrated and could have died if they had not been found, said local police chief Peter Kakamba. 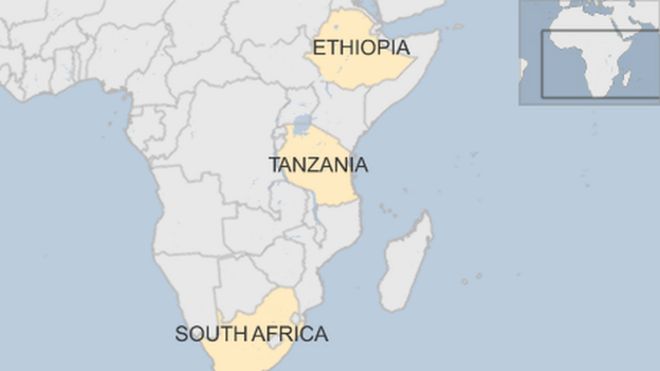 Tanzania has become a key staging post for people fleeing drought and conflict in Ethiopia and Somalia, and trying to reach South Africa.

“We had to have a team of nurses to put them on drips, they were starving, very weak, they were lying on top of each other in that lorry,” said Mr Kakamba.

“They were in such a bad condition, if we had delayed in finding them, they would have suffocated and lost their lives.”

He said that patrols are being stepped up to intercept migrants, as well as the Tanzanians assisting them.

The migrants were found travelling towards the southern town of Mbeya.

Late last year, more than 100 Ethiopian migrants were rounded up on their way to South Africa.

In June 2012 ,40 migrants from Ethiopia were found dead after they suffocated inside a truck transporting them in central Tanzania.

Dedza, Malawi (AFP) – The dream of a new life in South Africa has turned into a nightmare for hundreds of Ethiopian migrants held in

On Monday (31/8), according to IOM staff on the island of Kos, the Hellenic Police estimated that there were approximately 4,000 migrants on the island