A story of strength, spirit and survival is the subtitle of No Lipstick in Lebanon, a fictionalised true story of slavery in the Lebanon.

The book, published by Unbound, has been written by Chichester’s Paul Timblick in collaboration with his wife Fasika Sorssa, the woman who lived through the events it describes.

It tells a tale of bullying and beating, of thankless hours and awful isolation.

“I met Fasika four and a half years ago in Addis Abbaba in Ethiopia,” Paul recalls. “I was teaching English, and our eyes met across a cafe! We went out and we decided to get married, but in the early days she told me about her terrible experience working as a maid in Beirut. She was there for three years between the ages of 16 to 19.”

Fasika takes up the story: “People were saying you could go to get good money in Beirut. They showed me pictures. You could see the people were comfortable and lived in a beautiful house and were making good money, but the picture was false.”

The reality, as far as Fasika was concerned was anything but. She was supposed to be a nanny. In fact, she was a slave: “I was so happy. I was so excited to go there. I wanted to change my own life. My life was so hard.”

But soon the truth dawned on her. When her own tasks were done, the madame of the house would lend her out to her friends, and if she was slow or remiss in any way, the son of the house would beat her: “If I was tired or anything, I would be beaten.”

As Paul says: “It was slavery by any other name.”

She was forced to stay on for an extra year and yet still hadn’t been paid a penny: “Fasika did get home with 3,000 dollars, but it was for three years’ hard labour. She was not allowed to go out at all. She had no days off. She worked from 5am to 11pm. She wrote letters home to her mother which were never sent.

“Her mother assumed was she dead. In the wider context, a lot of girls do die in the region. Ethiopian girls go a bit crazy and jump off the balconies. Or some of them get raped by the son or the husband. They become impregnated, the wife becomes jealous and the wife pushes them off the balcony, saying they are mad.” 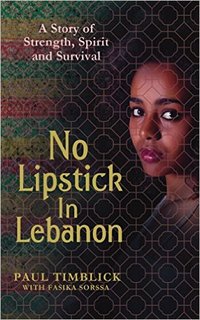 As Paul says, the Lebanese authorities pay no heed to migrant workers because of an ancient law under which responsibility fully passes to the family, leaving the girls with absolutely no protection. There are a quarter of a million migrant workers in Lebanon at the moment. Around a quarter are Ethiopians.

“The idea of the book is to get the message out there. I have had to change some names, but the book is essentially Fasika’s story. I wrote it in the first place as a straight non-fiction.

“I wanted to get the message across about the outdated legal system there and the horrendous conditions.

“But I also wrote it because it is a damned good story. I wrote it in the end as fiction because I didn’t want it to become a rant. I wanted people to actually want to read it. I wanted it to be a really good story that you could recommend to anyone.”

And if it helps change attitudes, then so much the better…

Video: Watch How Many Ethiopians Migrate To Beirut In Just A Day

Watch How Many Ethiopians Migrate To Beirut In Just A Day

Spark of hope for the mentally ill in Lebanon BEIRUT: When Joe Jaber hired a young Ethiopian woman two years ago to help his elderly parents

The Ethiopian Employee Who Calls A Bathroom A Home

In a small corner of Beirut, employers once again failed to see a human face above the hands that do its bidding and provide suitable