The Zimbabwe government took a major step towards completing the country’s land reclamation programme this week by gazetting 23 of the remaining 300 farms owned by white settlers for expropriation.

The planned seizures in the Matabeleland North and South provinces were announced despite an admission by Robert Mugabe’s ruling Zanu-PF party that it did not compensate more than 96% of white farmers already dispossessed since 2000, regardless of a constitutional obligation to do so.

Lands and Rural Resettlement Minister Douglas Mombeshora on Tuesday told Zimbabwe’s state media that “this is an ongoing programme which started in 2000 under the land reform programme. There’s nothing new here. In fact, farms are being acquired every day and redistributed because all agricultural land belongs to the state.”

Section 72 (2) of the Zimbabwean Constitution empowers the state to acquire agricultural land for “agricultural and other purposes”. Section 72 (3a) provides for compensation for improvements to land made by white Zimbabweans.

The latest wave of farm seizures comes barely six months after Zanu-PF acknowledged it did not pay compensation for land already seized and, in particular, it recommended against the seizure of land owned by foreigners and companies in terms of bilateral investment protection and promotion agreements (BIPPA).

“While the ministry of lands has been requesting treasury to provide funds to meet this obligation, the funds provided have been inadequate to the extent that, up to 2014, only 210 out of 6 214 former farm owners have been paid either fully or partially for improvements,” according to a Zanu-PF central committee document circulated among senior party officials.

“A decision has been taken by both Zanu-PF and government that we avoid acquiring for now BIPPA-protected farms to limit the country’s obligations.”

‘Don’t Be Too Kind To White Farmers’

Recent public statements by Mugabe and government officials point to a calculated decision to annihilate the white farming sector with or without compensation.

“Don’t be too kind to white farmers,” Mugabe said at a recent Zanu-PF rally. “They can own industries and companies, or stay in apartments in our towns, but they cannot own land. They must leave the land to Blacks.” 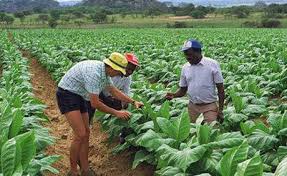