Adama Sankoh danced her way down the red carpet, past jubilant onlookers – including President Ernest Bai Koroma – and out of the Ebola treatment centre (ETC) in Makeni. It was a personal triumph for the 35-year-old Sierra Leonean but also, hopefully, the beginning of the end of her country’s Ebola nightmare.

Healthworkers in masks and full protective clothing danced and cheered as they escorted Sankoh from the high risk zone of the ETC, through the chlorinated shower, and on to a red carpet. There she was treated to a discharge-and-certification ceremony attended by cabinet ministers and development workers.

“It was like she was a rock star. There were at least 100 people there – politicians, press – everyone wanting a photograph of her,” said a spokesman for the International Medical Corps (IMC) in Makeni. Adama Sankoh, the last Ebola patient in Sierra Leone, is discharged from hospital outside Makeni on 24 August

But joy was nonethelesss tempered with caution. Sierra Leone must now anxiously await the passage of 42 days without a new case of the disease before it can officially be declared Ebola-free by the World Health Organisation.

Even then, officials know there is a risk of the disease re-emerging, either from neighbouring Guinea, which is not yet Ebola-free, or from within the population. Across the border in Liberia, fresh cases of the disease emerged seven weeks after the country had been declared Ebola-free.

And while there are no more patients inside the treatment centres, outside Ebola has left a legacy of grief, economic hardship and trauma.

Sankoh, whose 23-year-old son Moussa had contracted Ebola in the capital, Freetown, before travelling to his home village to mark the end of the Muslim holy month of Ramadan in July, thanked everyone who had cared for her.

She urged all citizens to continue to observe preventative measures, such as hand-washing and safe burial practices, and called on the government not to forget Ebola survivors, who are now highly vulnerable.

She also vowed to be the last person infected with the virus.

“Although my child died of Ebola, I am very happy that I have survived today,” she said, according to the Associated Press.

President Koroma described Sankoh’s discharge as “the beginning of the end of Ebola in Sierra Leone”, which recorded its first case in May 2014.

“Before we get to 42 days, we must stay the course and remain vigilant,” he said, asking the nation to remember the 3,586 people who are known to have died of the virus in Sierra Leone. 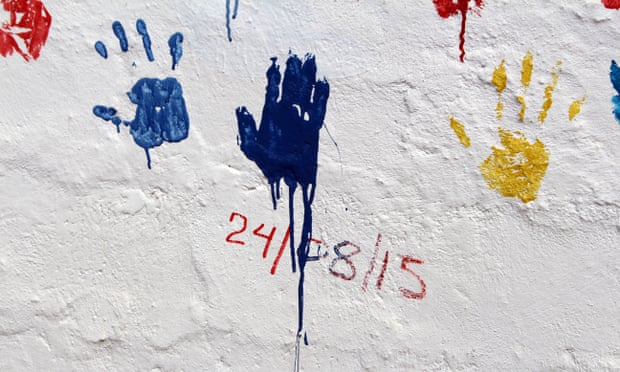 Handprint of the last Ebola survivor released from a treatment centre in Makeni, Sierra Leone.