The Guardian has an insight look in to the border town of Metema and its migrant’s activity after the slaughter of 30 Ethiopian migrants in Libya by ISIS. It tries to look at what it would like the flow of migrants through the border.

Metema, with a population of some 100,000 people, is one of a handful of towns across the region that serve as feeders for a booming trade in migrants from Ethiopia, Eritrea, Somalia and Sudan, with many hoping to make their way to Europe. Life has become a cat-and-mouse game: the authorities are cracking down, yet the migrants just keep coming, often risking death. 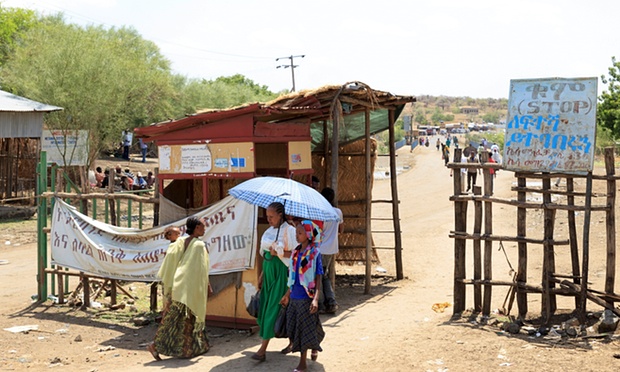 A checkpoint in Metema, next to the border with Sudan. The town is now a centre of a booming trade in migrants from Ethiopia, Eritrea, Somalia and Sudan. Photograph: Mulugeta Ayene/AP

Since 30 Ethiopian Christians who passed through Metema were killed by the Islamic State (Isis) group in Libya a few months ago, the Ethiopian government has become much more vigilant. It claims to have detained 200 smugglers across the country, and police say about 28 of them are from Metema.
In Metema, the effect of the crackdown is clear. But while the flow of migrants has dropped from about 250 a day, it’s still strong at 100 to 150, according to Teshome Agmas, the mayor. “It’s just a pity that people choose to endanger their lives in an effort to move out of their country and work in inhumane conditions abroad,” he said.