Home | News | Ethiopia, Where Hyenas Will Eat Out Of Your Mouth

Ethiopia, Where Hyenas Will Eat Out Of Your Mouth

For much of my life, despite hours of Animal Planet, my primary conception of hyenas came from The Lion King. Shenzi, Banzai, and Ed made hyenas out to be creepy but ultimately gawky, weak, and comedic characters (it’s hard to be frightened by villains voiced by Whoopi Goldberg and Cheech Marin) who occasionally burst out in choreographed song. But now, as I try to keep still, kneeling on the ground while a full-grown spotted hyena locks eyes with me and paces back and forth, its teeth about a foot away from my face, I begin to think Disney has lied to me yet again. Hyenas, contrary to popular belief, are active hunters rather than scavengers. They’re quite muscular as well, with the bulk of their mass loaded into their shoulders and stocky necks, giving the impression that they’re always a second away from lunging, latching, and effortlessly ripping away whatever flesh is in front of them. 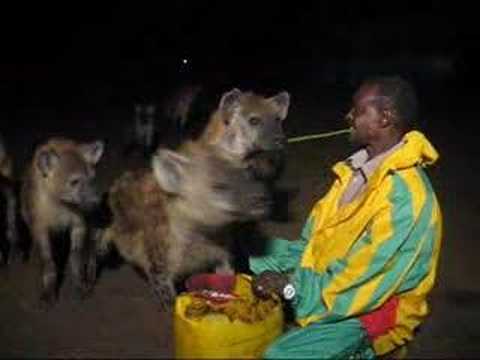 A small part of me is afraid that this creature, emboldened by its cackling brothers and sisters pacing around the brush behind us, might be less interested in the half-rotted slab of meat suspended from a stick between my teeth, and more interested in my face. But I push that thought to the back of my mind, because feeding hyenas mouth to mouth is just what one does when one comes to Harar, Ethiopia.