Every Saturday evening, the owner of the record goes to the longest laugh in the world Belachew Girma to school in the Ethiopian capital Addis Ababa to train his disciples, to laugh and to get rid of worries.

“Laughter and means of communication between everyone .. rich and poor, young and old, leaders and beggars” .. Thus began Girma (49 years) Speaking.

Girma and achieved the record for the longest laugh in the Guinness Book of Records in the world, after the laughter took three hours and 6 minutes without a stop in 2008, and holds a master’s degree in psychology and sociology.

He said Girma, who opened the Academy of Laughter in Africa in 2011, the school offers two types of training courses, the first training course of eight hours for the elderly, pregnant women, and the other is the “vocational training” course lasts 36 hours, which is dedicated to professionals such as nurses, doctors, psychologists and housewives.

He explained that the culture that works to spread them among his disciples at the School of laughter designed to calm the nerves and psychotherapy expand blood vessels and stimulate the heart muscles, and reduce stress to create a better world, pointing out that “the developed world to invest large sums in the treatment of psychiatric and neurological distress and stress.

He added that although he could not have access to everyone, hoping to be able to receive training in helping him to expand the circle of beneficiaries.

He noted Girma, known as the “king of laughter,” that the school has become accommodate trainees from different sectors of society at all levels, and anyone could join his school for a fee of about $ 22, but pregnant women are exempt from fees. 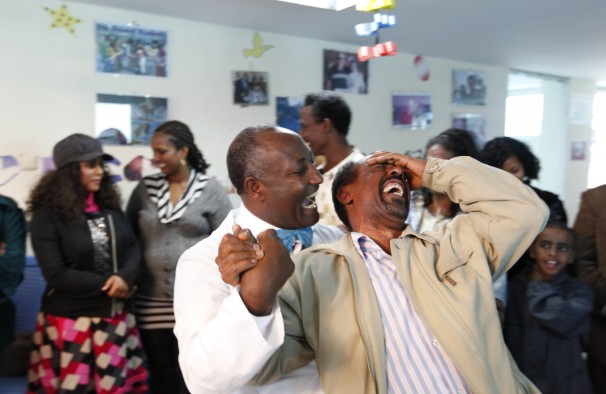 And non-pregnant women claim fees, among Girma he wants to encourage mothers to engage these courses so he can laugh and moves joy to those inside their bellies who will form the future, noting that pregnant when you laugh starts fetus by jumping into the uterus, and added that this will reflect positively on maternal and fetal health.

Since broke the world record, “Girma” seeks to draw a smile on the faces of its citizens in Ethiopia, where clinics and psychiatrists less.

Plans “Girma” to build the University of “happiness”, and the village of laughter, in an attempt to spread joy among his countrymen, and pointed out that Ethiopia is the first country to celebrate the National Day of laughter in the first of November each year.