Police are investigating a case in which a GSU lorry was impounded transporting 80 Ethiopians at Kangeta, Meru, on Tuesday.

After being arrested, some of the men collapsed.

It is believed they had travelled for a long distance without food.

They were taken to Nyambene District Hospital as police gave food to the rest. The driver escaped, Okello said.

“We have put the sergeant in our custody hoping he will assist us in the investigations,” he said.

Okello said the Ethiopians travelled through secret routes in Moyale and Meru.

He said police were tipped off by the public.

Okello said the sergeant explained that the lorry was being taken for servicing in Meru town when he found the Ethiopians, who asked for a lift.

“We suspect this same vehicle could have been used to ferry aliens in the past on several occasions through the same routes,” Okello said.

He said it is wrong for a government vehicle to be engaged in criminal activities that threaten national security.

Okello said investigations by the CID are underway to establish whether the immigrants are linked to terrorism.

“The sergeant who was arrested will not be spared. We are warning other officers abetting this form of illegal migration,” Okello said. 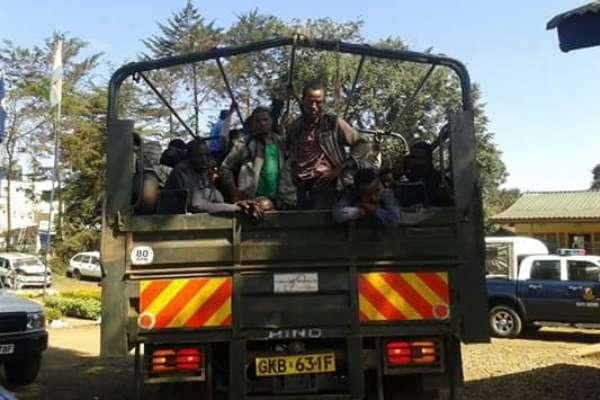 A GSU lorry which was impounded transporting more than 80 Ethiopians at Kangeta, Meru, on Tuesday