UK’s Air Accidents Investigation Branch (AAIB) has confirmed the cause of a 2013 fire on a parked Ethiopian Airlines Boeing 787-8 at London Heathrow Airport. It was caused by thermal runaway in the lithium metal batteries of the aircraft’s Emergency Location Transmitter (ELT), AAIB has stated in an official report.

In the report into the July 12, 2013 fire, which it classed as a “serious incident,” AAIB found that the fire, which badly damaged the crown of the fuselage just forward of the tailfin, “was initiated by the uncontrolled release of stored energy from the lithium-metal battery in the ELT.”

The fire was most likely triggered by an external short-circuit, created by the battery wires having being crossed and trapped under the Honeywell ELT battery compartment cover plate when the ELT battery was last accessed.

This “probably created a potential short-circuit current path, which could allow a rapid discharge of the battery. Root Cause testing performed by the aircraft and ELT manufacturers supported this latent fault as the most likely cause of the ELT battery fire, most probably in combination with the early depletion of a single cell,” the AAIB said.

“Neither the cell-level nor battery-level safety features were able to prevent this single-cell failure, which then propagated to adjacent cells, resulting in a cascading thermal runaway, rupture of the cells and consequent release of smoke, fire and flammable electrolyte.”

The trapped battery wires in turn compromised the environmental seal between the battery cover-plate and the ELT, “providing a path for flames and battery decomposition products to escape.” 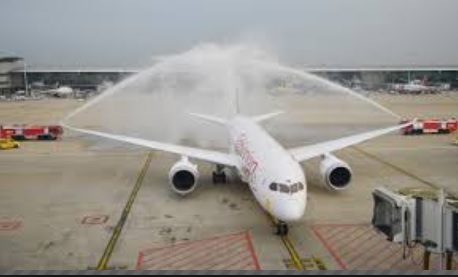 The flames “directly impinged … on the composite aircraft structure.” This led to resin in the composite material of the fuselage crown decomposing, providing further fuel for the fire.

“As a result of this, a slow-burning fire became established in the fuselage crown, which continued to propagate from the ELT location … even after the energy from the battery thermal runaway was exhausted.”

It noted that the location of the ELT in the fuselage crown made it difficult for firefighters to locate the fire.

In the event of an inflight fire from this source, AAIB noted, it would be “challenging” for cabin crew to locate and fight the flames.

In the immediate aftermath of the incident, FAA instituted several safety measures, including inerting the ELT. It subsequently initiated a safety review of lithium-powered ELT systems.

Among new recommendations issued in the report, AAIB said the FAA, EASA and Transport Canada should assess the circuit protection offered by the Honeywell ELT battery, to determine whether the ELT/battery design was adequate to mitigate against external short-circuits or unbalanced discharges.

More widely, it also recommended that the three regulatory bodies should review lithium metal battery-powered equipment on board transport aircraft to ensure adequate protection against such short circuits or discharges.

Manufacturers intending to use such equipment should have to demonstrate that their designs could adequately dissipate any heat produced by such a fault.

The AAIB also recommended that Boeing “expedite the modelling of the B787 Environmental Control System, to examine the distribution of the ELT battery combustion products through the aircraft cabin, and demonstrate the results of this modelling to the FAA.” Boeing told ATW in an emailed statement: “The final report by the AAIB is extensive and thorough, and we appreciate the effort put into the investigation. We are committed to a process of continual improvement of our airplanes and we will carefully review the AAIB’s recommendations. It is important that any potential changes to the airplane’s design be reviewed with great care, and with due consideration for any potential unintended consequences of any change. We will work closely with regulators, operators and industry partners to ensure that the safety of the world’s commercial jetliners continues at the highest levels.

“Following the incident in 2013, the US Federal Aviation Administration (FAA) mandated Boeing’s recommended cross-model inspection of all Honeywell RESCU 406 Emergency Location Transmitters (ELTs). Operators have confirmed to the FAA that all in-service ELTs are in compliance with federal regulations.

“The safety of passengers and crew members who fly aboard Boeing airplanes is our highest priority. We are confident the 787 is safe and we stand behind its overall integrity.”