Home | News | OMG! Husband Catches His Wife In Bed With Her Driver

OMG! Husband Catches His Wife In Bed With Her Driver

A female bank manager simply identified as Susan, with one of the new generation banks in the country was handed the disgrace of her life when she was reportedly caught having sex with her driver on her matrimonial bed by her husband. 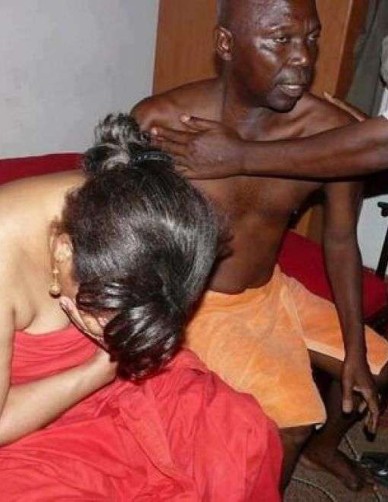 According to reports, the sordid incident happened in Lugbe, a suburb of Abuja, the Federal Capital Territory, when the husband, a director with a ministry in the FCT, acting on a tip off after he was intimated of his wife’s adulterous way of life, came back home suddenly to meet what turned out to be a nightmare for him.

A source who was part of the spy team narrated: “On the day of the discovery, the man had ‘gone’ work, unknown to his wife that he was lurking around the corner waiting to see if what he heard all along was true. He did not have long to wait as shortly after 11 am, he noticed the wife’s car drive into their house with her official driver, who was also suspected to be her lover.

After waiting for some moments, the man sneaked into his compound and with his keys, used the back door to gain access to the house and lo and behold, his beloved wife was being ravaged on their matrimonial bed.

The shocked man did the unthinkable by pulling out a gun on the adulterous pair and ordered them out naked. He could have paraded them in the street naked if not for neighbours who begged on their behalf.

As we speak, the man has sent the wife parking and is set to conduct a DNA test on the three children to ascertain if they are actually his.”