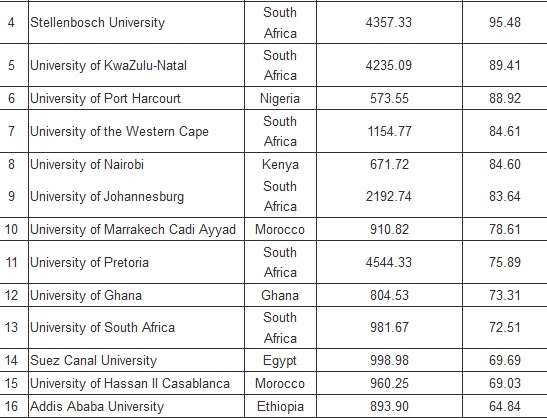 Institutions from 10 countries feature in a top 30, a new ranking for African Universities and the biggest Ethiopian University Addis Ababa University made it at 16th raw.

The top 30 snapshot was calculated using the ratio of the citations received by an institution’s publication output between 2009 and 2013 and the total citations that would be expected based on the average of the subject field. To be included in the table, an institution must have published a minimum of 500 research papers in the five-year period assessed, with at least 50 papers per year.

South Africa dominates a snapshot of what a new ranking for African universities could look like, making up two-fifths of the institutions in the list. Egypt is the second most-represented country, with six universities in the top 30 table, which was drawn up by Times Higher Education and measures research impact. Morocco and Tunisia both have three institutions making the running. The top 30 snapshot was released as THE holds its inaugural Africa Universities Summit at the University of Johannesburg, and builds on the top 15 that was previewed earlier this year.