The Incredible Love Story Of Nick Vujicic And His Wife

Do you know this man, guys? He is Nick Vujicic. He has no arms, no legs and NO worries. Some of us have everything yet, we keep complaining! 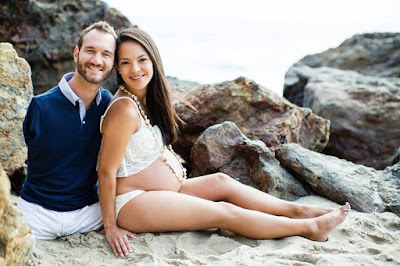 Being born without limbs hasn't stopped Australian Nick Vujicic achieving more than most people. The 32-year-old motivational speaker, who has Tetra-amelia syndrome that is characterised by the absence of arms and legs, is expecting his second child with wife Kanae.

Kanae Miyahara Vujicic, wife of "limbless evangelist" Nick Vujcic, tells of the "magical," yet complicated moment she first laid eyes on the man she believed she would marry, in their new co-authored book, Love Without Limits.

"There was definitely a spark and a strong attraction from the first moments I locked eyes with Nick," writes Kanae of their initial meeting, which occured in 2010 at a small Dallas event in which Nick was the guest speaker.

Indeed, when Nick first locked eyes with Kanae, who was sitting in the audience, he "had to force himself to look away."

The two chatted at the conclusion of the event and though the Serbian-born Australian evangelist was certain of what he was feeling, Kanae wasn't quite as sure. She did know, however, that she was intrigued.

As for Nick, he apparently was so smitten with Kanae that he texted a mutual close friend, who wanted to play matchmaker, what he really thought of the Japanese-Mexican woman he had just met: "She is the most beautiful woman of God I've ever met in my life. She literally took my breath away!"