Court issues protection order preventing three sisters, aged six to 12, from being taken out of UK after mother testifies she has ‘never recovered’ from FGM herself

Three sisters whose father was deemed to be preparing to have them undergo female genital mutilation (FGM) have been made the subject of a new-style protection order aimed at stopping the practice.

The mother of the three girls, aged six, nine and 12, submitted evidence to the family division of the high court in London that the children’s father had been putting pressure on her to have the procedure performed on their daughters. Both parents are Nigerian.

Ceremonial robes, worn during the cutting of external female genitals, had been sent to her from the girls’ family in Nigeria, the court heard.

In a written statement, the girls’ mother, who is divorced from their father, said she had “never recovered from the experience” of being cut herself, and said her decade-old wound still caused her terrible pain. 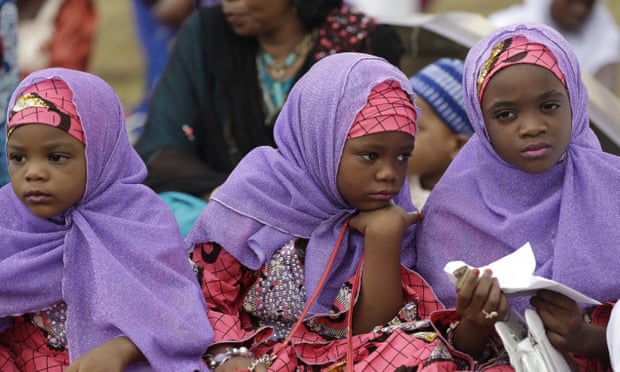 Nigerian girls in Lagos. About a quarter of Nigerian women have undergone FGM

Zimran Samuel, a barrister representing the girls’ mother, told the judge that the girls’ father had been “putting pressure” on the mother to have the procedure done in the UK or in Nigeria. FGM is illegal in both countries.

“The father is currently in Nigeria and can arrive or instruct someone else to act,” he told the judge. “It was felt that there is a real risk that the girls may be cut in this jurisdiction or in Nigeria or may go missing.”

The FGM protection order is a new legal power that came into force in the UK this month to stop the practice, and the sisters are one of the first few cases of such an order being granted.

The judge said he would analyse the case further on 11 August and the girls’ father would be permitted to mount a challenge.

The Nigerian government outlawed the practice in May this year, the final piece of legislation by the outgoing president Goodluck Jonathan. About a quarter of Nigerian women have undergone FGM, which can be fatal or cause repeated infections, as well as pain urinating, during sex and in childbirth.

Last week, Bedfordshire police seized the passports of two young girls, who it was believed may be taken to Africa to undergo FGM. A parent in Salford also received a protection order this week, banning the daughter from being taken out of the country. It was the first FGM banning order in Greater Manchester.

A study by City University and Equality Now has estimated that 137,000 women and girls are affected by FGM, which involves the total or partial removal of external female genitalia for non-medical reasons, with the highest rate of prevalence found in the London borough of Southwark.

Women and girls affected by female genital mutilation can be found in every local authority in England and Wales, the study found.