Zimbabweans In Ethiopia To Pay $50

Zimbabweans living in Ethiopia will have to fork out $50 to catch a glimpse of their aging leader, President Mugabe next week.

Mugabe (91) is due in Addis Ababa, Ethiopia on  March 29 on African Union business.

However, crafty  Zanu PF supporters in Ethiopia have asked that Zimbabweans living in that country contribute $50 each to host Mugabe.

According to Southern Eye and quoting e-mails its saw, Rodney Kiwa, the chairperson of Zimbabweans in Ethiopia executive committee, notified his compatriots of Mugabe's impending visit.

"I had a meeting with the ambassador this morning, the burden of message being to communicate to him the recommendations of the executive committee, which was held at the Chancery last Friday, March 20," reads the e-mail. 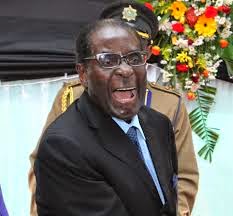 "That the committee was asking him to convey this request to him so that when the president comes to Addis, meeting the Zimbabwean community is part of his programme.

"The ambassador informed me the president arrives on March 29."

Zimbabwe's ambassador to Ethiopia is Albert Ranganai Chimbindi. The meeting will be held at that country's Sheraton Hotel at a date and time to be announced when Mugabe is in that country, Kiwa said.

"That we were expecting up to 80 people, inclusive of the president's delegation.

"In this regard, each member of the community (is) to contribute ETB1 000 or more towards the cost of hosting the event.

"Please note that every Zimbabwean is being invited, member or not of the association."

Mugabe is hardly spending time in Zimbabwe and is reportedly gobbling millions of dollars in foreign travels, with revelations that his trips so far this year may have cost $10 million.

As the chairman of the African Union (AU), Mugabe is expected to travel to Ethiopia for a meeting of the continental body, just days after the completion of an official visit to Algeria.

Barely a week after the end of the AU meeting, Mugabe is scheduled to travel to neighbouring South Africa for a two-day official visit.