Monk Prays By Sitting In A Pot Of Boiling Water

According to Bangkok Post, the monk looks at ease despite sitting in a vessel of oil with fire raging underneath. He is also seen sharing his magical powers with others by touching objects that they pass to him. His followersbelieve that his touch can make their amulets or pieces of fabric powerful. These objects are apparently sold to the locals and other places of worship. 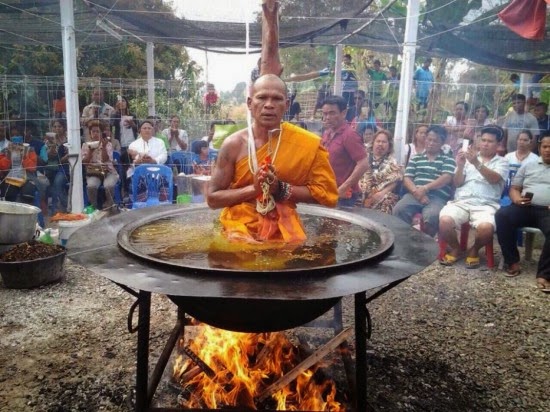 But not everyone believes the act was real. A science instructor, Jessada Denduangboripant of Chulalongkorn University, said there was no proof that the oil was really boiling at the time.

“The only way to prove it is to measure the temperature of the oil he’s sitting in,” she wrote. “The oil doesn’t look like its boiling and the pan just looks strange. The pan might have two layers to insulate the heat,” he said.