An Egyptian court has handed down death sentences to the leader of the Muslim Brotherhood movement and 13 others, state media has reported.

Mohammed Badie and the other key members of the group were found guilty of planning attacks against the state.

Badie is embroiled in several trials and has been sentenced to death before, although the sentences were later reduced to life imprisonment.

Egypt's government declared the Muslim Brotherhood a terrorist group in 2013.

The court referred the case to Egypt's Grand Mufti, the country's senior Sunni authority, the first step in ratifying the death sentences.

A final verdict is due on 11 April, although the defendants can appeal. 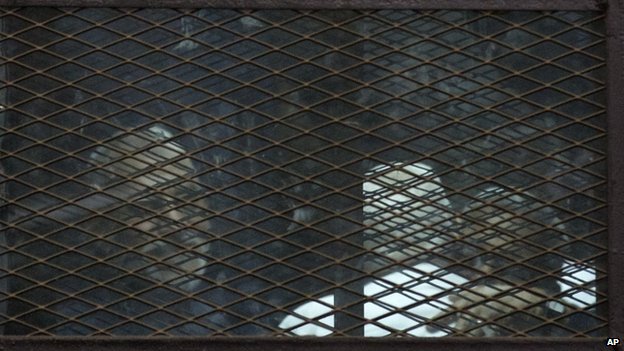 The 14 were accused of setting up a control room to direct the movements of Brotherhood supporters across the country.

He said the verdicts were handed down even though the defence had not finished its closing arguments concerning five of the defendants.

Meanwhile, a court in the northern city of Mansura also sentenced to death eight Brotherhood members accused of setting up a "terror cell" and murdering opponents of the Islamist organisation, state news agency MENA said.

Their verdicts were also referred to the country's top Sunni Muslim authority.

The court is due to give a final verdict in that case on 22 June.

Hundreds of people have been sentenced to death in a crackdown on Islamists following the removal of President Mohammed Morsi in 2013.

Earlier this month, Egypt carried out its first execution over the violence that followed Mr Morsi's overthrow.

Mr Morsi is facing several trials, some of which could result in the death sentence.

Badie is a veterinary pathologist by training and assumed the leadership of the Muslim Brotherhood in 2010.