All across Ethiopia’s capital Addis Ababa, groups of young day labourers are hard at work on city’s flagship infrastructural project. Most are men in their twenties, wearing hats and scarves to protect their faces from the dust and sun.

They say the job is monotonous, but rewarding. Bit by bit, these young workers are constructing the first urban light rail transit system in sub-Saharan Africa.

From Lagos to Nairobi, similar transportation projects are under consideration across the continent in order to facilitate the movement of people in what is considered to be one of the most rapidly urbanising region in the world.

In a bustling city like Addis Ababa, where roads and buildings seem to be perpetually under construction, the near-finished railway is an inspiring sight.

Just months ago, roads and intersections were reduced to rubble by excavation crews. Now, much of the dirt has been cleared and some major thoroughfares are divided by neatly laid tracks and overhead electrical wires. 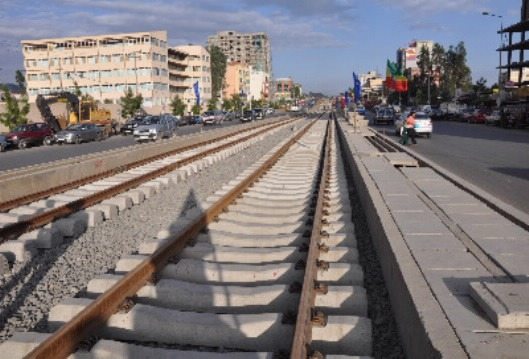 Dereje Tefera, communications chief for the Ethiopian Railways Corporation, which runs the project, says there is currently a “shortage of transport” in the city, where commuters often catch rickety minivans packed past capacity.

“In order to support our development, we need modern transport systems.”

The light rail encompasses about 34 kilometres of track and is expected to begin taking passengers within three months.

Like the many other state-driven development projects in Africa’s second-most populous country, it relies on foreign financing.

The railway corporation is owned by the central government, and the light rail, which costs US$475 million and gets 85 per cent of its funding from the Ex-Im Bank of China, was contracted out to the China Railway Engineering Corporation (CREC).

Light Rail Project Manager Behailu Sintayehu says that about 4,800 local workers are employed by the contractor, which is important for knowledge transfer.

“For each and every discipline in the contract, there is a clause that enforces the contractor to arrange capacity building program training,” Behailu says, adding that several engineers have travelled to China to learn about some of the light rail’s key components.

One of them is engineer Debebu Terefe. Last year, the 31-year-old spent a month in China to learn about the installation of communications equipment. “It’s so useful to us, because we practiced current technologies. I can use that knowledge for all kinds of projects in my country,” he tells Equal Times.

But not everyone benefits equally from China’s involvement in the project. Several workers in Addis Ababa say they received no formal training from their CREC superiors before getting to work. They suspect their employer doesn’t want to spend resources on them, even though some report wages that are relatively generous for unskilled labour.

Seid Hussein, 24, lays bricks for station platforms. He appreciates his pay of 100 birr (US$4.91) per day, but complains that his contract limits him to work just two months.

“If a worker stays on the job for a long time, he will ask for more pay. So the Chinese just hire new people all the time,” he says.

Mohammed Yesuf, 20, is proud to be working on the city’s flagship project. “But we didn’t get any training, and we can’t communicate much with our Chinese bosses,” he says.

“They just show us what to do with their hands, and we do the best we can.”

A threat to minivans?

Some citizens of Addis Ababa have mixed feelings about the work these men are doing. Car owners complain that the rails have cut off key turning points, and some businesses on the wrong side of the tracks are now facing losses because their customers don’t want to walk all the way down to the nearest pedestrian crossing.

Melat Haile, 20, looks forward to using the train for her daily commute to school. “And for the time being, the construction hasn’t been too bad,” she says.

Perhaps most concerned are those who drive the crowded minivans, which are the most popular form of public transportation in the city with an average trip costing less than 4 birr (US$0.20).

The light rail fare has yet to be determined, but Dereje says the corporation is determined to make it affordable.

He says the light rail has already made life more difficult. “With all the construction, the traffic is crazy,” he says. “And when the train starts running, our profits will go down. I might try to find other work.”

Still, he shares the general enthusiasm over the prestige this project will bring to his home city.

“It’s difficult for us, but it will be great for Addis Ababa to have a train,” he says. “For the passengers, it’s going to be a good thing.”