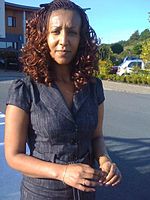 Etiyé Dimma Poulsen (born 1968) is an Ethiopian-born Danish sculptor known for her work in ceramics. Biography Until she was six, Poulsen lived in Ethiopia, moving to

Abebe Bikila ( August 7, 1932 – October 25, 1973) was a double Olympic marathon champion from Ethiopia, most famous for winning a marathon gold

Gedewon Makonnen, called Gedewon (1939-1995), was an Ethiopian artist. Born in Begemder, Gedewon trained as a cleric in the Ethiopian Orthodox Church. As part of his