By Afp and Julian Robinson for MailOnline

Saudi Arabia is planning to blame one of its top intelligence officers for journalist Jamal Khashoggi's death, it has been claimed.

The kingdom's rulers could point the finger at General Ahmed al-Assiri, who is close to Crown Prince Mohammed bin Salman, sources have claimed.

They will say he was responsible for a botched interrogation of the writer that the country's leaders knew nothing about, the New York Times reports.

Khashoggi, 60, went missing having entered the Saudi consulate in Istanbul two weeks ago sparking claims he was tortured and murdered in the building. Turkish police want to question 15 Saudis who flew to Turkey on the day he disappeared. 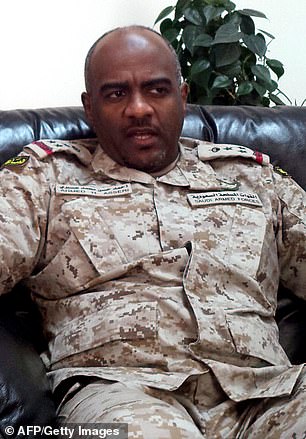 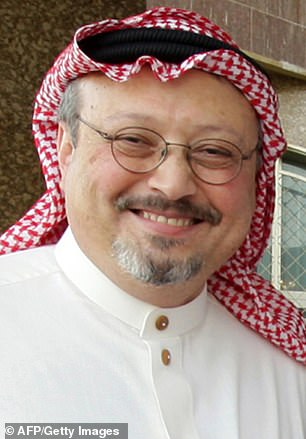 Saudi Arabia is planning to blame a top intelligence officer General Ahmed al-Assiri (left) for Jamal Khashoggi's (right) death, it has been claimed 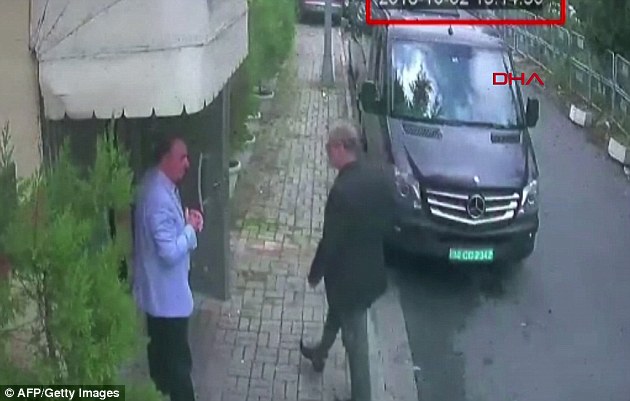 Jamal Khashoggi (right) arriving at the Saudi Arabian consulate in Istanbul on October 2. He has not been seen since and Turkey has accused Saudi agents of murdering him

The New York Times said it had spoken to three people with knowledge of the Saudi plans relating to General Assiri, who had earlier served as the spokesman for the Saudi-led military intervention in Yemen before being promoted to his current job in intelligence.

Two of the sources said Saudi rulers are set to explain that Assiri had been given verbal permission from the Crown Prince to capture Mr Khashoggi for questioning in Saudi Arabia but that he either overstepped the authorisation or misunderstood his orders.

The newspaper said Assiri had not responded to requests for comment.

It comes after President Donald Trump said he now believes Khashoggi is dead and warned of 'very severe' consequences should Saudi Arabia be proven responsible.

'It certainly looks that way to me. It's very sad,' Trump told journalists when asked if he believed that Khashoggi, who disappeared more than two weeks ago, is no longer alive.

Asked about the potential US response to Saudi Arabia, which is accused of murdering the Washington Post columnist and critic of the Saudi regime, Trump said: 'It will have to be very severe. It's bad, bad stuff.'

This marked a hardening of tone from the Trump administration, which has been reluctant to blame ally Saudi Arabia, despite mounting evidence that the kingdom's agents killed and dismembered Khashoggi inside its consulate in Istanbul more than two weeks ago. 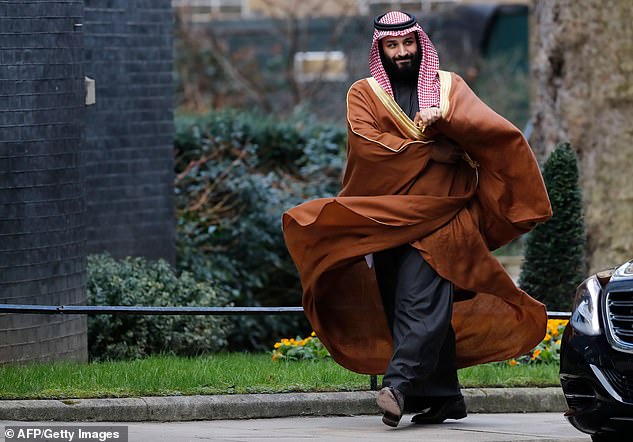 A former regime insider, Khashoggi had become a critic of powerful Crown Prince Mohammed bin Salman, the point man in ever-tightening military and commercial relations between the petro-state and the Trump administration.

Just hours earlier, Secretary of State Mike Pompeo said he had told Trump the Saudis should be given 'a few more days to complete' an investigation.

Turkey on Friday denied giving 'any kind of audio tape' from the investigation into the disappearance of journalist Jamal Khashoggi at the Saudi consulate in Istanbul to US Secretary of State Mike Pompeo or any American official.

'It is out of the question for Turkey to give any kind of audio tape to Pompeo or any other US official,' said Turkish Foreign Minister Mevlut Cavusoglu, two days after meeting with the US's top diplomat for talks in Ankara.

Turkey's pro-government press has reported that Turkey has an audio recording that proves the alleged murder of Khashoggi at the consulate and that he was tortured before his death.

The existence of the tape has never been confirmed on the record by Turkish officials.

ABC News, quoting a senior Turkish official, reported Thursday that during his visit to Turkey this week Pompeo heard this audio and was shown a transcript of the recording. But Pompeo denied the report.

Cavusoglu, like other Turkish officials, stopped short of revealing details of the investigation but vowed they would be shared in due course.

'We will share the results to emerge with the entire world. It is out of the question for us to share this or that information with any country,' he said, quoted by the state-run Anadolu news agency.

Only then, Pompeo said, 'we can make decisions how or if the United States should respond.'

Four prominent human rights and press freedom groups on Thursday urged Turkey to request a United Nations investigation to prevent a 'whitewash' of the alleged crime.

The Committee to Protect Journalists, Human Rights Watch, Amnesty International and Reporters Without Borders said such a probe established by UN Secretary-General Antonio Guterres would finally clear up the affair.

But the United States, the Saudis' most powerful patron, has repeatedly given the country's royals the benefit of the doubt, with Trump and top officials stressing that the US-Saudi relationship cannot be put at risk.

Trump has repeatedly praised massive Saudi arms purchases, while Pompeo used much of his brief remarks on Thursday to recall Washington's 'long strategic relationship with the kingdom of Saudi Arabia.'

The Saudis 'continue to be an important counter-terrorism partner, they have custody of the two holy sites... We need to be mindful of that as well,' he said.

The furor has also blown a hole in next week's Future Investment Initiative conference in Riyadh, which was meant to showcase Prince Mohammed's plans for modernizing the desert kingdom.

US Treasury Secretary Steven Mnuchin said he was pulling out, joining senior ministers from Britain, France and the Netherlands, as well as a string of corporate leaders.

His withdrawal 'raises worry that the administration is being pushed to take a harder line against Saudi Arabia over the Khashoggi murder and there could be retaliation,' said Karl Haeling of LBBW.

Responses from Saudi Arabia could include selling US Treasuries, or punishing US companies seeking business in the kingdom, Haeling said. 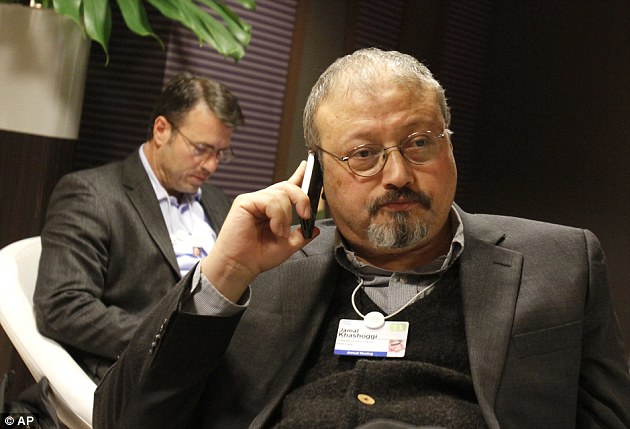 Missing journalist Jamal Khashoggi, pictured in Switzerland in 2011, may have been murdered because he knew too much about the Saudi royal family, one of his friends has said

Russian President Vladimir Putin, meanwhile, took a dig at Washington, saying that 'the US holds a certain responsibility over what happened to him.'

But he said Moscow would not 'start deteriorating relations' with Saudi Arabia as long as 'it did not know what really happened.'

Neither Turkey nor the United States has publicly confirmed that Khashoggi is dead or said officially that Riyadh is to blame.

But a steady stream of unconfirmed leaks from officials to Turkish media have painted a detailed and horrifying picture of Khashoggi's last minutes, allegedly at the hands of 15 Saudi agents waiting for him when he came to the consulate for paperwork.

The pro-government Yeni Safak newspaper on Wednesday claimed it had heard audio tapes in which Khashoggi's alleged killers tortured him by cutting his fingers off before his decapitation.

ABC News, quoting a senior Turkish official, reported Thursday that during his visit to Turkey this week Pompeo heard this audio and was shown a transcript of the recording. But Pompeo and Turkey denied the report.

The pro-government Sabah newspaper on Thursday said Saudi security official Maher Abdulaziz Mutreb, believed to be close to the crown prince, was the leader of the operation.

'Here is the head of the execution team,' said Sabah's headline, and the paper then detailed Mutreb's movements on the day Khashoggi went missing.

Meanwhile, Turkish officials say investigators are assessing the possibility whether the remains of missing Saudi journalist Jamal Khashoggi may have been taken to a forest in the outskirts of Istanbul or to another city, if and after he was killed inside the diplomatic mission earlier this month.

The official told The Associated Press on Friday that police have established that two vehicles belonging to the Saudi consulate left the building on October 2 - the day Khashoggi had walked into the consulate and vanished.

The official says one vehicle went to the Belgrade Forest outside Istanbul while the other travelled to the city of Yalova. It's unclear if police had already searched these areas.