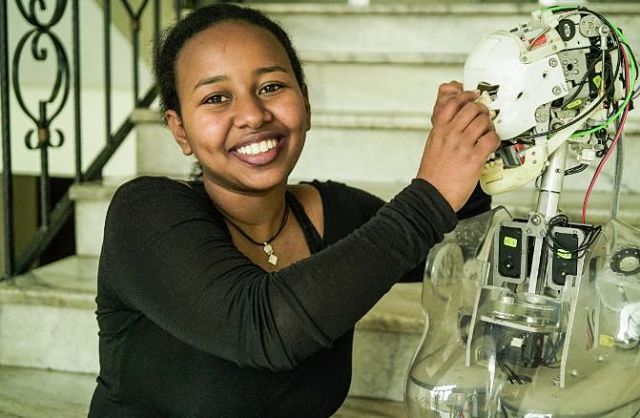 Betelhem Dessie, 19, has four software programs copyrighted solely to her name - including an app developed for the Ethiopian government to map rivers used for irrigation. (CNN)

Dessie is coordinating a number of nationwide programs run by robotics lab iCog, the Addis Ababa based artificial intelligence (AI) lab that was involved in developing the world famous Sophia the robot.

She has four software programs copyrighted solely to her name – including an app developed for the Ethiopian government to map rivers used for irrigation.

And it all began when she was just 9.

She recalls: “On my 9th birthday I wanted to celebrate so I asked my father for money.” When her father said he didn’t have any to give her that day, Dessie took matters into her own hands.

Making use of the materials around her – her father sold electronics in their home city of Harar in eastern Ethiopia – Dessie started with small tasks such as video editing and sending music to customer’s cell phones.

“I got about 90 dollars – then I celebrated my birthday” she laughs, sitting in one of the robotics and coding rooms at iCog, Ethiopia’s first AI lab.
iCog launched in 2013 and Ethiopia’s tech industry is set to take off even faster this year following the liberalization of the country’s economy under new Prime Minister Abiy Ahmed.