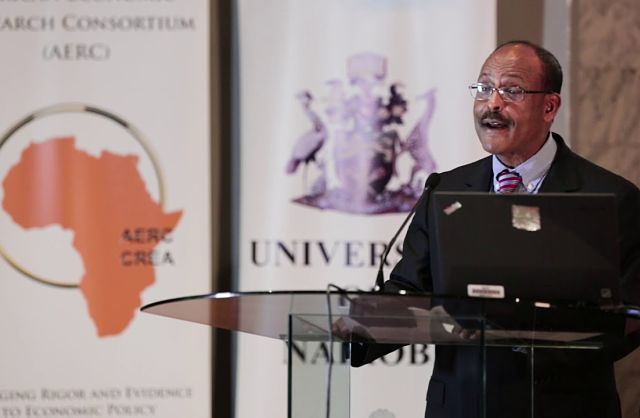 New York (TADIAS) – After a successful five-year term as the head of the African Economic Research Consortium (AERC) — a Kenya-based non-profit organization that conducts independent research concerning the management of economies in sub-Saharan Africa – Professor Lemma W. Senbet, an internationally recognized leader in finance studies has returned to continue teaching at the University of Maryland, College Park.

“I am now back in Washington from an incredibly satisfying five-year Africa journey in the service of the Motherland,” Professor Lemma told Tadias. Before leaving the U.S. to lead AERC Lemma had shared with us in an interview that he “will be embarking on strategies for full global integration of AERC and its visibility beyond Africa as an organization that is at the cutting edge of best policy research practices.”

In 2015 under his leadership AERC received the highest possible rating as the most transparent think tank in the world. According to a report released by Transparify AERC was one of 31 major centers of research worldwide, out of 169 examined, that was given a five-star rating. The list included several American policy research establishments such as the Center for Global Development, Pew Research Center, Stimson Center, Woodrow Wilson Center and the World Resources Institute.

Last year Dr. Lemma was also one of the presenters during a high–level panel held in Rome, Italy comprising of representatives and experts from the G7 and selected African think tanks. The conference “focused on Africa and addressed three key issues related to Agenda 2030: food security, innovation and mobility.”

Now back in the U.S. Professor Lemma shares that his next steps involve working with the recently formed Diaspora committee that will help to raise funds for Ethiopia. His background as an economist as well as his non-political, non-partisan and fact-based approach to complex issues will certainly bring a much-needed skill set to the group — which also includes several highly qualified individuals whose work we have previously featured in Tadias such as Dr. Bisrat Aklilu, retired United Nations official; Elias Wondimu, Publisher of Tsehai Publishers; Dr. Menna Demissie, Vice President of Police Analysis & Research at the Congressional Black Caucus Foundation; and Mimi Alemayehou, Managing Director of Black Rhino Group & Executive Advisory and Chair of Blackstone Africa Infrastructure.

In his departing speech to his colleagues at AERC, Professor Lemma told his audience that he will continue to advocate for Africa once he returns to the U.S. and he has already hit the ground running.