Selam Ethiopian Kitchen: An Uptown butcher shop and market has evolved into a forum for East African feasting.

Let’s say you’ve gone to war in the mountains. You and your men have a chance for a breather. You’ve found a secluded spot, easily defensible, near water and not far from a few cowherds, from whom you’ve liberated one of their fattest animals. Everybody’s hungry and it’s time to make camp. The enemy’s not far, but you don’t know exactly where he is. He doesn’t know where you are either, but you definitely don’t want to attract his attention—so no fires, guys, sorry. We’ll just have to eat this cow raw.

Something like that might have happened sometime back in Ethiopia’s epic history, an originating event that became the foundation of the nation’s love for raw beef. Ethiopians are said to have been the first people to learn to drink coffee. It’s not impossible that they were the people to invent steak tartare. 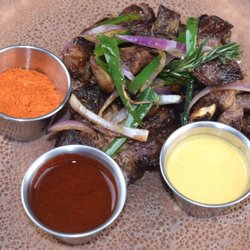 You might recognize this particular innovation as kitfo if you’re acquainted with the singular pleasures of Ethiopian food—and you certainly will if you were familiar with Uptown’s erstwhile Selam Market (now Selam Ethiopian Kitchen), a one-stop butcher shop for everything Ethiopian and edible.

Starting in 2009, husband and wife Solomon and Selamawit Abebe offered a handful of fleshy treats at a few tables in their shop, among them said kitfo: freshly ground raw beef massaged with the spiced clarified butter known as niter kibbeh and a brick- orange spice blend called mitmita, loaded with chile, clove, cardamom, garlic, ginger, and more. It’s served with a mixture of the ricotta­like cheese ayib and pureed collards on the side, and to eat it you scoop up gobs of each with the tangy, spongy flatbread injera, then pop them into your greedy mouth.