You Are Here: Home → News
Vulnerable Plymouth Dad who has Gone Missing, Believed to be in Ethiopia
List of PM Hailemariam Desalegn’s new Ministers

New York (TADIAS) — Twitter is reacting skeptically to Prime Minister Hailemariam Desalegn’s announcement of a reshuffled cabinet in Ethiopia today, which apparently is designed to appease a growing and popular uprising calling for land and political reforms as well as an end to corruption at the highest levels of government. According to media reports “among top party officials leaving the government are Dr. Tedros Adhanom, Minister of Foreign Affairs, Redman Hussein, Minister of Youth and Sports, and Getachew Reda, Minister of Government Communications.”

Tedros Adhanom, Minister of Foreign Affairs, is among those who is leaving his post.

On social media people are already expressing their views:

“The question would remain to be can the new cabinet make a new #Ethiopia we want without having a parliament to represent us?,” Zone9 blogger BefeQadu Z. Hailu asked via Twitter.

Zone9 Blogger NYU Research Scholar Zelalem Kibret added: :Ethiopia’s ruling party will make its 4th major Cabinet reshuffle in six years time. That means one new cabinet for every one and half year.”

While BBC News Field Producer Hewete Haileselassie noted: “#Ethiopia cabinet – departure of @DrTedros was expected, as he is a candidate to head @WHO.’ 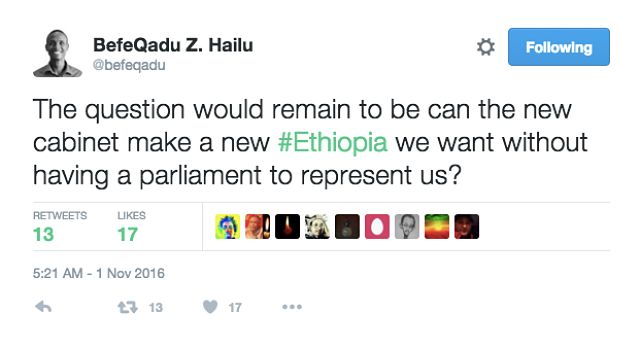 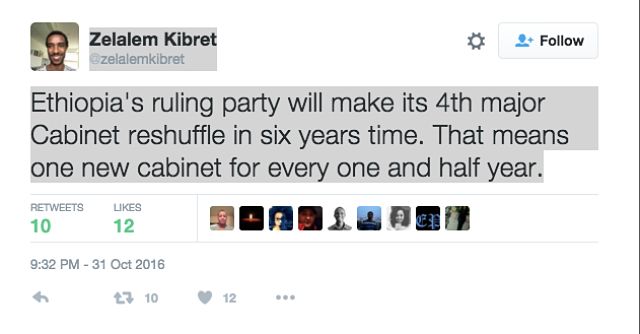 Per VOA News “the appointees include a new minister of foreign affairs, Workneh Gebeyehu, who replaces Tedros Adhanom, a former health minister who has been one of Ethiopia’s most recognizable public figures in recent years. Adhanom is currently a candidate vying to be the next World Health Organization’s chief. Communications Minister and government spokesman Getachew Reda was ousted and replaced by Negeri Lencho, the head of the journalism and communications college at Addis Ababa University.”