On this day, August 17, it is good to remember Tsegaye Gabre-Medhin, Ethiopia’s greatest playwright, and acclaimed Poet Laureate, as the day is his birthday. Born in the highland village of Boda, near Ambo, west of the Ethiopian capital, Addis Ababa, Tsegaye began his education in the heady days in the immediate aftermath of the Italian Fascist occupation, which had ended in 1941. While still at elementary school he wrote a play called “King Dionysus and the Two Brothers” and saw it staged in the presence, among others, of Emperor Haile Selassie.

His interests, however soon took him away from both commerce and law, which he considered as necessary, but soul-destroying pursuits. He turned instead to his true loves: poetry and the theatre. In 1960 he travelled to Europe to study experimental drama at the Royal Court Theatre in London and the Comédie Française in Paris. On returning to Ethiopia, he devoted himself unreservedly to the development of the country’s National Theatre – which institution last week staged an impressive memorial for its former director. 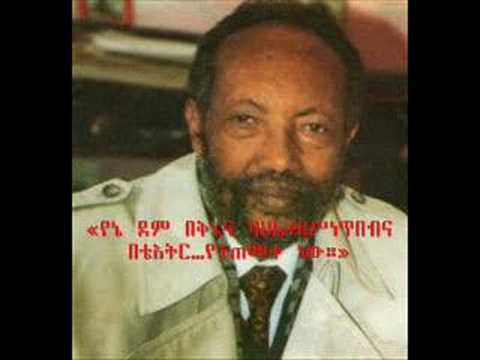 Besides compositions of his own Tsegaye translated Shakespeare (Hamlet and Othello being the most popular of these works), as well as Moliere’s Tartouffe and Doctor Despite Himself, and Bertolt Brecht’s Mother Courage.

Tsegaye, in all things a patriot, was proud of Ethiopia’s long history of independence, and of her unique cultural heritage. He insisted emphatically that his country needed heroes, and used the theatre deliberately to teach his compatriots to respect the Ethiopian heroes of their past. One of the most widely acclaimed of his plays, Tewodros, commemorates the life of the charismatic Ethiopian emperor of that name. A pioneer reformer and moderniser, he committed suicide in 1868 rather than fall into the hands of a British expeditionary force which had been dispatched against him.

Another of Tsegaye’s plays, Petros at the Hour, tells the story of Abuna Petros, an Ethiopian bishop, who accompanied Ethiopia’s freedom-fighters in their struggle to resist the Italian fascist occupation. Captured by the enemy on the outskirts of Addis Ababa he was subjected to a trumped-up show trial, which reduces the audience to tears.

Yet another play, the Oda Oak Oracle, a comedy about Ethiopian country life, also enjoyed great popularity, both in Ethiopia and abroad, and was staged in no less than eight countries: Britain, Denmark, Italy, Kenya, Nigeria, Romania, Tanzania, and the United States.

His poems, both in Amharic and English, were also widely read. A score of them, including Prologue to African Conscience and Black Antigone, were published in the Ethiopia Observer in 1965. Another poem, in Amharic, castigated the European nomenclature for the waterfalls of Sudan and Egypt – which totally ignored those of Ethiopia, and caused Tsegaye proudly to refer to the Ethiopian Tissestat, or Blue Nile Falls as the “Zero Cataract”.

During this time Tsegaye travelled widely; he attended the UNESCO-organised First World Black Festival in Dakar, Senegal, and the Pan-African Cultural Festival in Algiers. In 1966, at the age of only 29, he was awarded his country’s highest literary honour: the Haile Selassie I Prize for Amharic Literature – which earned him the title of Laureate, by which he has ever since been known. 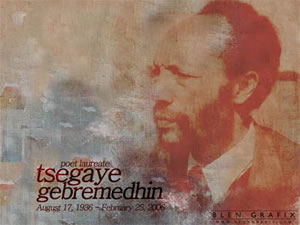 Ardent patriot that he was, Tsegaye was insistent that his beloved Ethiopia should be seen in wider, Africanist terms. Befriended by President Léopold Sédar Senghor of Senegal, he took a keen interest in the Négritude movement, and in the Paris-based journal Présence Africaine. He frequently emphasized the African roots of the theatre; and devoted much time to studying ancient Egyptian history – to gain a better knowledge of the overall culture of the Nile Valley. This led him to make an extensive study of linguistic history of the region, with special emphasis on the relationship between his country’s Cushitic and Semitic languages. He was at around this time appointed a Commander of the National Order of Senegal.

Later, after the Ethiopian revolution of 1974 and the fall of Haile Selassie, Tsegaye was appointed for a short time as vice-minister of Culture and Sports, and was active in setting up Addis Ababa University’s department of Theatre Arts. In 1984 he wrote an extended, and very poetical, essay “Footprints in Time”, which appeared with beautiful photographs by the Italian photographer Alberto Tessore, as a “coffee table” book. It traced Ethiopian history from the prehistoric time of Lucy, the first-known hominid, who had then recently been found in the afar area of eastern Ethiopia.

One of Tsegaye’s passionate interests throughout this time was in the struggle to regain Ethiopia’s looted treasures. A close friend of Chief Segun Olusola, the Nigerian Ambassador in Addis Ababa, who was a fellow poet, Tsegaye was present when the ambassador agreed to throw his diplomatic pressure behind the popular Ethiopian demand for the return of the Aksum obelisk looted by Fascist Italy on Mussolini’s personal orders in 1937. The chief’s support marked a turning point in the Aksum Obelisk Return movement.

Tsegaye was no less insistent that Britain should return the manuscripts, crosses, tents and other loot taken – unjustly, as he saw it, from Emperor Tewodros’s mountain citadel of Magdala in 1868. Much of this loot is currently in the British Museum and British Library, as well as in Britain’s Royal Library in Windsor Castle, which currently holds six remarkably finely illustrated Ethiopian manuscripts.

Tsegaye always believed in the unity of the Ethiopian people and felt that this by far transcended purely political matters of the day. In later years he concerned himself increasingly with questions of peace, human rights and the dignity of humanity. He was elected to the United Poets Laureate International, and received many international awards – the most recent of them from Norway.

Despite his health problems Tsegaye was active – and creative – to the last. Ever true to his African aspirations in 2002 he composed a poem on the continent’s cultural heritage, which the newly-established African Union adopted as its anthem; it read:

“All sons and daughters of Africa, flesh of the son and flesh of he sky, Let us make Africa the tree of life.”

Unable to return to his native land, which lacked the dialysis facilities on which his life literally depended, Tsegaye remained in close contact with the Ethiopian diaspora by whom he was affectionately referred to as Blattengetta, a title traditionally accorded to the most distinguished of Ethiopian scholars. Tsegaye died in Manhattan on 25 February. He was 69, and had for several years been prevented from returning to his native land by his need to undergo dialysis treatment in the US.

Into the model chairs

By the friendly pharos of its time

Yet is taken in.

It forgets to look into its own self:

The broken yoke threatens to return

In the luring shape

Of luxury and golden chains

That frees the body

And enslaves the mind.

And the wise brains

Of the strong sons of the tribes

With an even more strange suffocation.

Its new self awareness

(In spite of its tribal ills)

its torn spirits together:

Its past and present masters

(With their army of ghosts

That remained to haunt the earth)

And tear it apart:

And the African conscience