European Firms' Funds The War In The Central African Republic

European Firms' Funds The War In The Central African Republic

The companies paid millions of dollars to rebel groups accused of war crimes, the report says.

It accuses the EU of failing to stop imports of illegal timber to Europe. 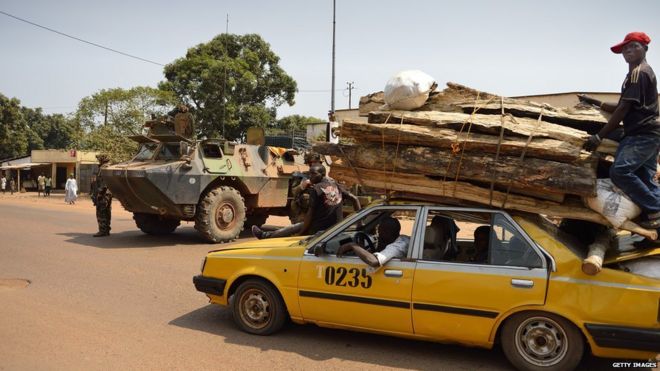 Thousands of people have been killed in the conflict which followed a coup by the Seleka rebel group in March 2013.

Timber companies from France, Lebanon and China paid more than $4m (£2.5m) to rebels in 2013, mainly for protection services, the report says.

Rebels on all sides of the conflict have been accused by the UN of mass murder, kidnappings, rapes and the forced recruitment of child soldiers.

The report also criticises the EU for failing to seize any timber coming from the CAR since the start of the conflict, despite European regulations against illegal timber.

Europe accounts for nearly two-thirds of timber exports from the CAR, and companies in France, Germany and Belgium have all been trading in the commodity, it says.

"It is tragically ironic that while European governments invested hundreds of millions of euros in military and peacekeeping operations in CAR, those same governments have failed to keep conflict timber off EU markets," Alexandra Pardal, Campaign Leader for Global Witness said in a statement.

Former colonial ruler France deployed 1,600 troops to the country in 2013 in a bid to disarm the militias, and a 700-strong European peacekeeping mission to boost security in the capital Bangui ended in early 2015.

Some 12,000 international troops are still based in the country as part of the UN mission in the CAR.