Alexander "Skunder" Boghossian (July 22, 1937 in Addis Ababa, Ethiopia – May 4, 2003 in Washington D.C.) was an Armenian Ethiopian painter and art teacher. He spent much of his life living and working in the United States.[1]

Boghossian was born on July 22, 1937 in Addis Ababa, at the time the capital of the Italian colony Italian East Africa, one and half years after the Second Italo-Abyssinian War.[1] His mother, Weizero Tsedale Wolde Tekle, was Ethiopian.[1] His father, Kosrof Gorgorios Boghossian, was a colonel in the Kebur Zabagna (Imperial Bodyguard) and of Armenian descent.[1] Kosrof's father, Gregorios Boghassian, an Armenian trader, had established a friendship with Emperor Menelik II and worked as a traveling ambassador in Europe on behalf of the Emperor.[4] Boghossian's father was active in the resistance against the Italian occupation and was imprisoned for several years when Boghossian was a young child.[1] His mother had set up a new life apart her children and although both he and his sister Aster (Esther) visited their mother frequently, they were raised in the home of their father's brother Kathig Boghassian.[4] Kathig, who was serving as the Assistant Minister of Agriculture, together with other uncles and aunts brought them up during their father's imprisonment.[4]

He attended a traditional Kes Timhert Betoch kindergarten where he was taught the Ge'ez script.[1] In primary and secondary school, he was taught by both Ethiopian and foreign tutors and become fluent in Amharic, English, Armenian and French.[1] He studied art informally at the Teferi Mekonnen School.[5] He also studied under Stanislas Chojnacki, a historian of Ethiopian art and watercolor painter.[5]

Boghossian won second prize at the Jubilee Anniversary Celebration of Haile Selassie I in 1954.[6] The next year he was granted a scholarship which allowed him to study in Europe.[6] He spent two years in London, working at St. Martin's School, the Central School, and the Slade School.[6] He then spent nine years studying and teaching at the Académie de la Grande Chaumière in Paris. In 1966 he returned home, teaching at Addis Ababa's School of Fine Arts until 1969. In 1970 he emigrated to the United States, teaching at Howard University from 1972 until 2001.

Boghossian was the first contemporary African artist to have his work purchased by the Musee d’Art Moderne in Paris in 1963. In 1966, the Museum of Modern Art in New York acquired his painting Juju's Wedding (1964).

In 1977, he became the first African to design a First Day Cover for a United Nations stamp.[6] He was commissioned by the World Federation of United Nations Associations.[6] His pen and ink drawing on the theme of "Combat Racism" for the cover and the accompanying stamp were issued on September 19, 1977.[6]

In 2001, Boghossian worked with Kebedech Tekleab on a commission called Nexus for the Wall of Representation at the Embassy of Ethiopia in Washington, D.C.[7] The work is an aluminum relief sculpture (365 x 1585 cm) mounted on the granite wall of the embassy.[7] Nexus includes decorative motifs, patterns and symbols from Ethiopian religious traditions including Christianity, Judaism, Islam and other indigenous spiritual practices incorporating symbolic scrolls and forms representing musical instruments, utilitarian tools, and regional flora and fauna.[7] 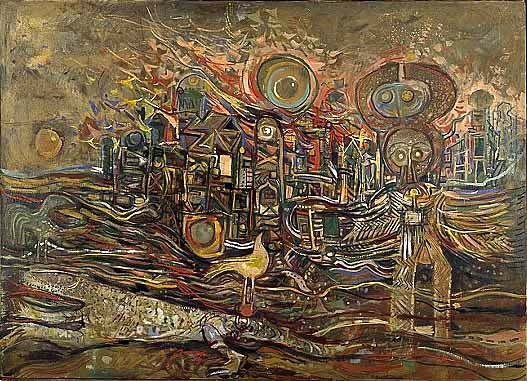 His work is held in a number of permanent collections including the Museum of Modern Art in New York,[8] Musee d’Art Moderne in Paris,[8] the Studio Museum in Harlem[8] and the National Museum of African Art in Washington, DC.[8]

Boghossian is represented in New York by the Contemporary African Art Gallery.[3]

Boghossian has two children, Aida Mariam and Edward Addisu.[3][5] Boghossian died on May 4, 2003, at Howard University Hospital in Washington, DC. He was 65.[3] Following his death, Sharon F. Patton, director of the Smithsonian's National Museum of African Art said "As a major figure in modern African art history, he opened the way for others to follow and left an important body of work behind."[2]

District of Colombia Certificate of Appreciation.[9]

About the Author: Liya Ahmed

Etiyé Dimma Poulsen (born 1968) is an Ethiopian-born Danish sculptor known for her work in ceramics. Biography Until she was six, Poulsen lived in Ethiopia, moving to

Abebe Bikila ( August 7, 1932 – October 25, 1973) was a double Olympic marathon champion from Ethiopia, most famous for winning a marathon gold

Gedewon Makonnen, called Gedewon (1939-1995), was an Ethiopian artist. Born in Begemder, Gedewon trained as a cleric in the Ethiopian Orthodox Church. As part of his