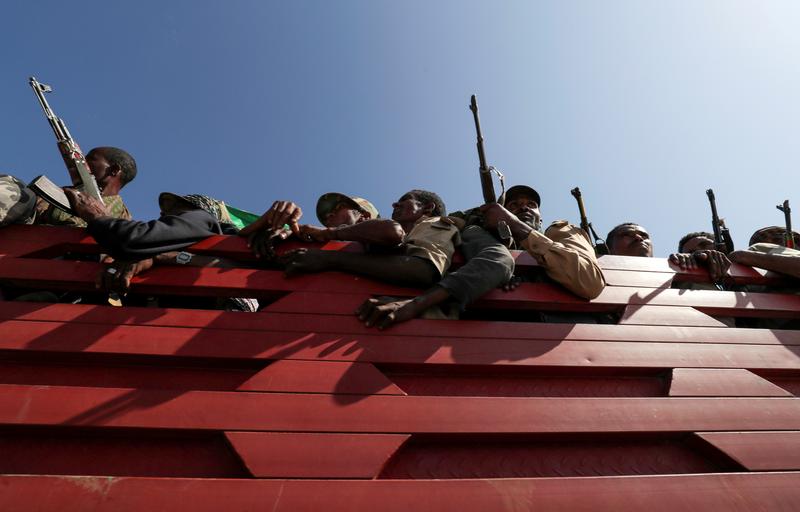 One of the rockets hit the airport in Gondar and partially damaged it late on Friday, said Awoke Worku, spokesperson for Gondar central zone, while a second one fired simultaneously landed just outside of the airport at Bahir Dar.

“The TPLF junta is utilising the last of the weaponry within its arsenals,” the government’s emergency task force wrote on Twitter.

Debretsion Gebremichael, chairman of the TPLF and the state’s president, said the airports were legitimate targets.

“Any airport used to attack Tigray will be a legitimate target, not cities of Amhara,” he told Reuters in a text message.

Hundreds of people have been killed in the 11-day-old war. Prime Minister Abiy Ahmed sent the national defence force on an offensive against local troops in Tigray last week, after accusing them of attacking federal troops.

An Ethiopian Airlines worker who did not wish to be identified said flights to both Gondar and Bahir Dar airports had been cancelled after the attacks.

Yohannes Ayele, a resident of Gondar, said he heard a loud explosion in the Azezo neighbourhood of the city at 10:30 p.m..

Another resident of the area said the rocket had damaged the airport terminal building. The area was sealed off and firefighting vehicles were parked outside, the resident added.

The Amhara regional state’s forces have been fighting alongside their federal counterparts against Tigray’s fighters.

The United Nations, the African Union and others are concerned that the fighting could spread to other parts of Ethiopia, Africa’s second most populous country, and destabilise the wider Horn of Africa region.

More than 14,500 people have fled into neighbouring Sudan, with the speed of new arrivals “overwhelming the current capacity to provide aid”, the U.N. refugee agency said on Friday.

Ethiopia’s Human Rights Commission, appointed by the government but independent, said it was sending a team of investigators to the town of Mai Kadra in Tigray, where Amnesty International this week reported what it said was evidence of mass killings.

The commission will investigate any human rights violations in the conflict, it said in a statement.

The Ethiopian military will begin the “final phase” of an offensive in the northern Tigray region, Prime Minister Abiy…

Fuel and cash are running out while food for nearly 100,000 refugees from Eritrea will be gone in a…

Leaders in Ethiopia’s northern Tigray state have rejected the government’s claims that federal troops are surrounding the regional capital,…

Government-affiliated commission says local youth group with help from police and militia responsible for mass killings on November 9.At…

The Ethiopian government’s war against the Tigray regional government in the country’s north is approaching a decisive moment, as…

Earlier this month, a simmering political and ideological conflict between Ethiopia’s federal government and the northern region of Tigray…

What animals can teach us about being better human beings