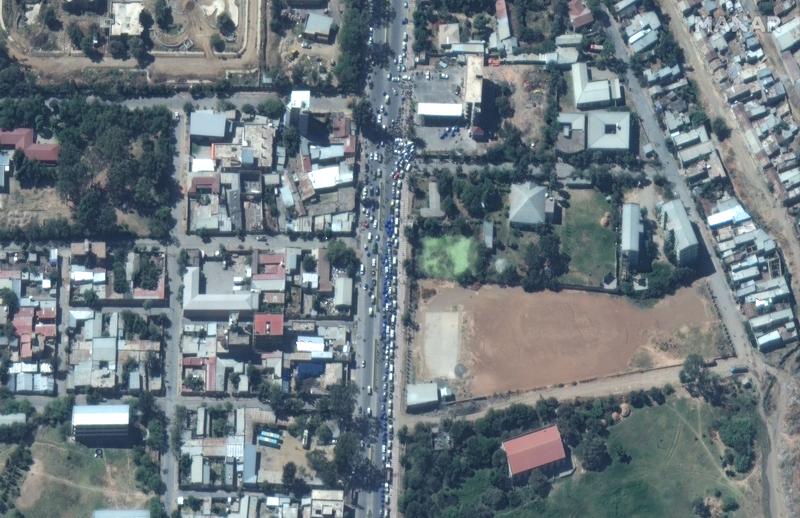 ADDIS ABABA/NAIROBI (Reuters) – Ethiopian Prime Minister Abiy Ahmed said on Saturday that military operations in the restive region of Tigray are complete and federal troops control the regional capital, a major development in a three-week-old war that has shaken the Horn of Africa.

“I am pleased to share that we have completed and ceased the military operations in the Tigray region,” he said in a tweet. Less than an hour earlier, he said in a statement, “The federal government is now fully in control of the city of Mekelle”.

However the leader of Tigray People’s Liberation Front (TPLF) forces, who have been fighting Ethiopian troops since Nov. 4, said the TPLF was not giving up.

“Their brutality can only add (to) our resolve to fight these invaders to the last,” TPLF leader Debretsion Gebremichael said in a message. Asked by Reuters in a text message if that meant his forces will continue fighting, he replied: “Certainly. This is about defending our right to self determination.”

There was no immediate response to this from the government.

In his statement, Abiy said police would continue searching for and detaining TPLF leaders.

“Federal police will now continue their task of apprehending TPLF criminals and bring them to the court of law,” said the prime minister, who has called the government offensive a law and order operation.

It was not clear if any of the TPLF leaders had surrendered. Debretsion said in a text message to Reuters that their forces were withdrawing from around Mekelle.

Claims from all sides are difficult to verify since phone and internet links to the region have been down and access tightly controlled since the fighting began.

Thousands of people are believed to have died during the fighting this month, and nearly 44,000 refugees have fled to neighbouring Sudan. Tigray also borders the nation of Eritrea and the conflict has stirred concern about an escalation around the country of 115 million people, or in the region.

Authorities had said earlier on Saturday that government forces were in the final stages of an offensive in the region and would take care to protect civilians in Mekelle, a city of 500,000 people.

Abiy said the army had secured the release of thousands of troops from the Northern Command, a military unit based in Tigray, who he said had been held hostage by the TPLF.

Federal troops had taken control of “the airport, public institutions, the regional administration office and other critical facilities,” Abiy said.

The government had given the TPLF an ultimatum that expired on Wednesday to lay down arms or face an assault on the city.

Regional diplomats and experts have said the rapid military victory the government has sought may not signal the end of the conflict.

Two diplomats told Reuters it was likely that Tigrayan forces had withdrawn from Mekelle before the government’s push into the city, raising the prospect of a protracted guerrilla war.

The prime minister has so far rebuffed attempts at mediation. Abiy accuses Tigrayan leaders of starting the war by attacking federal troops at a base in Tigray. The TPLF says the attack was a pre-emptive strike.

The Tigray region has a history of guerrilla resistance and used its highland terrain and foreign borders to its advantage through years of armed struggle in the 1980s against a Marxist government.

It was not clear if federal forces had seized weapons stocks on Saturday. The government said in the first week of the conflict that a target of its airstrikes was military hardware seized by Tigrayan forces.

NO WORD ON CASUALTIES

Abiy did not mention in his statements whether there had been casualties in the offensive to capture Mekelle.

Rights groups have been concerned that an assault on the city could lead to significant civilian casualties.

The prime minister’s spokeswoman, Billene Seyoum, had said earlier on Saturday: “The safety of Ethiopians in Mekelle and Tigray region continues as priority for the federal government”.

Billene said: “The Ethiopian National Defense Forces do not have a mission to bombard its own city and people. Mekelle remains one of Ethiopia’s key cities and the efforts to bring to justice the criminal clique will not entail discriminatory ‘bombardment’ as alluded by TPLF and their propagandists.”

Debretsion also accused the Eritrean military of crossing the border and raiding refugee camps in Tigray to capture refugees who have fled Eritrea in the past.

The Eritrean government has not responded to calls from Reuters for more than two weeks.

United Nations refugee agency chief Filippo Grandi said on Saturday that he was deeply concerned about the 100,000 Eritrean refugees in Ethiopia, and what he called unconfirmed reports of violence against them.

The TPLF and Eritrea are archenemies: the TPLF was in charge in Addis Ababa when Ethiopia and Eritrea fought a war from 1998-2000. But Eritrea and Abiy have warm relations. The Ethiopian government has denied TPLF accusations that Eritrean troops are operating on Ethiopian soil.

Eritrea is one of the world’s most repressive nations and around 10% of the population has fled.

Tigrayans, who make up about 6% of the Ethiopian population, dominated the government until Abiy took power two years ago. He pledged to unite Ethiopians and introduce freedoms after years of state repression that filled jails with tens of thousands of political prisoners.

His government also put senior Tigrayan officials on trial for crimes such as corruption, torture and murder. The Tigrayan region saw those trials as discrimination.