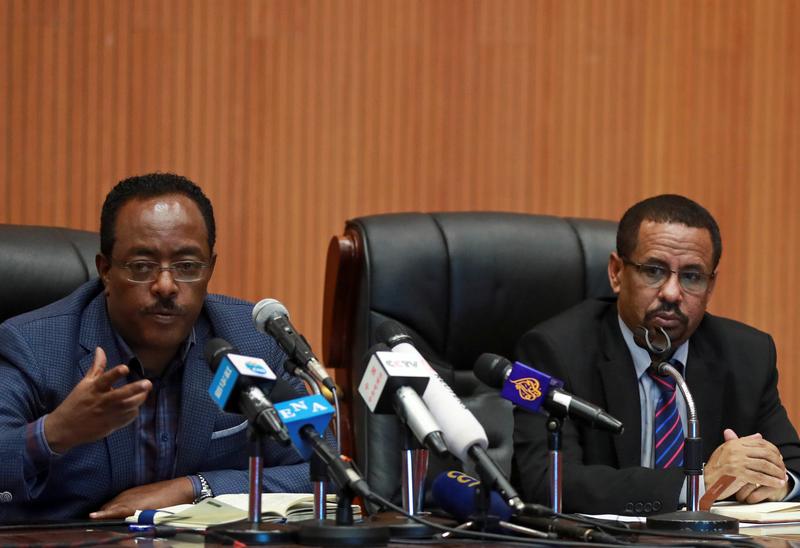 ADDIS ABABA (Reuters) – Ethiopia said on Thursday it was bearing down on the capital of Tigray region in a two-week-old war, and tore into the World Health Organization (WHO) head with accusations of diplomatic lobbying for the rebels.

As international alarm grew over spreading instability in the Horn of Africa, U.S. President-elect Joe Biden’s team appealed for an end to fighting and protection for civilians.

Abiy’s government says its troops have won a string of victories and will soon reach state capital Mekelle, a highland town of about 500,000 people, where the regional ruling Tigray People’s Liberation Front (TPLF) has strong support and a battle-hardened history.

“Our defence forces are moving forward and closing in on Mekelle,” government spokesman Redwan Hussein told reporters. “There are a number of towns that have fallen.”

The war has pitted the central government against one of the most heavily militarised of 10 ethnic states that make up Ethiopia. Tigrayans from the TPLF effectively ruled Ethiopia for decades as the strongest force in a multi-ethnic coalition, until Abiy took power two years ago.

The government says the TPLF has turned renegade and is holding power in Tigray illegally. The TPLF says the war is part of an unconstitutional assault on regional rights. Both sides accuse the other of atrocities and blocking humanitarian aid.

The government-appointed head of a newly-named interim administration for Tigray, academic Mulu Nega, said new local elections were planned to restore peace to the region once TPLF leaders were ousted.

Ethiopian soldiers were advancing along roads from the south and northwest of Mekelle, a diplomat tracking the conflict said. The TPLF leader told Reuters that while it had lost ground in the south and federal soldiers had taken the town of Shire to the west, it still held the town of Axum, about 215 km (130 miles) north west of Mekelle, implying resistance was fierce.

In text messages, Debretsion Gebremichael also said Mekelle was bombed on Thursday, but gave no details. The TPLF’s information bureau said its forces had eliminated two army divisions and a mechanised force around the town of Alamata, without offering evidence.

“Attempting to rule the people of Tigray by force is like walking on a burning flame,” the TPLF warned on Wednesday.

Assertions by all sides have been impossible to verify because internet and phone connections to Tigray have been suspended and the government has restricted access.

Tigrayans held sway in Ethiopia for more than two decades despite making up just 5% of the population, as leaders of a coalition that took power in 1991.

Abiy, whose parents are from the much larger Oromo and Amhara ethnic groups, came to power in 2018 pledging to unite Ethiopians and end an era where one ethnic group had dominated. The TPLF bucked against the change and accused Abiy’s government of an ethnic vendetta against former officials.

Ethiopia’s military on Thursday accused the most prominent Tigrayan abroad, WHO head Tedros Adhanom Ghebreyesus, of trying to procure arms and diplomatic backing for the TPLF.

Ethiopian army chief Birhanu Jula called Tedros, who served as a minister in a TPLF-led Ethiopian coalition government for more than a decade before taking the helm of the global health body, “a criminal”. Bihanu provided no evidence, and Tedros and the WHO offered no immediate response.

Hundreds of foreign aid workers have left Tigray, warning of a spiralling crisis in an area where hundreds of thousands of people relied on food aid even before the fighting.

“The TPLF and Ethiopian authorities should take urgent steps to end the conflict, enable humanitarian access, and protect civilians,” added Blinken, who is expected to play a senior role in the incoming U.S. administration.

Experts on Ethiopia are sceptical that the government can dislodge the TPLF, which has a long history of guerrilla warfare from mountainous Tigray.

The TPLF has fired rockets at Eritrea, while Ethiopia has removed weapons from ethnic Tigrayan soldiers in its peacekeeping contingent in Somalia.

In the capital Addis Ababa, there have been blood donations for federal soldiers, but also sadness about Ethiopians fighting each other.

“There will be no winner. War will bring nothing but loss,” said a woman of Tigrayan origin, who asked not to be named.